In recent years, we’ve become accustomed to seeing records broken on an almost weekly basis. Whether it’s the goal scoring feats of Cristiano Ronaldo and Lionel Messi, Manchester United’s purchase of Paul Pogba, or the contrived notion of Premier League records, to hear that a new milestone has been reached feels more like a piece of trivia, rather than an all-time great achievement these days.

But, just as French striker Just Fontaine’s high mark of 13 goals at the 1958 World Cup has never been surpassed, Brazilian winger Jairzinho’s record of scoring in every match of a World Cup finals has not been matched since he became only the second player to do so in 1970 – Alcides Ghiggia, the star of Uruguay’s 1950 team, is the other.

Since Jairzinho’s magnificently consistent campaign in Mexico 46 years ago, 11 World Cup tournaments have been held – with such legendary goal-getters as Gerd Müller, Marco van Basten and Gabriel Batistuta all featuring – yet no player has been able to replicate the Brazilian’s feat of scoring in his nation’s opening game, the final, and every fixture in between.

Ronaldo came close in 2002 when he netted eight times to help the Seleção claim their fifth title, but the former Barcelona and Internazionale striker failed to score against England in the quarter-final.

As a young man, Jairzinho idolised Garrincha, the legendary bow-legged wing wizard of Brazil’s 1958 and 62 World Cup triumphs – and he would eventually play alongside, then replace, the great dribbler for both club and country.

Jairzinho made his debut for Rio de Janeiro club Botafogo as teenager, playing as a striker with Garrincha on the wing. Whenever Garrincha was injured and unable to play, Jairzinho would replace him on the right wing – his favourite position – and when Garrincha left the Lone Star to join Corinthians in 1965, Jairzinho made the right-wing role his own. 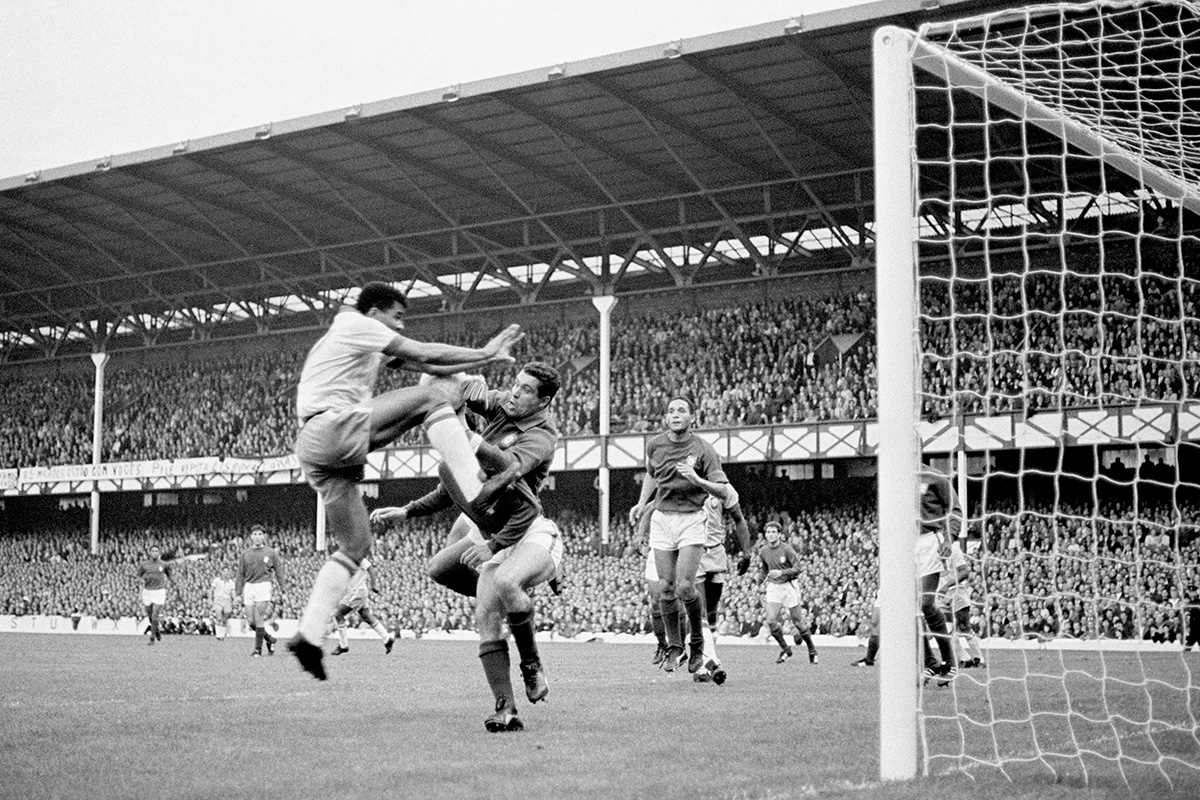 It was a similar story at international leveL, with Garrincha unavailable, Jairzinho made his Seleção debut as a 19-year-old against Portugal in 1964. When the 1966 World Cup in England came around, Garrincha had returned to the side and Jairzinho was forced to play on the left, reducing his effectiveness. But after the tournament, Garrincha announced that he was hanging up his international boots, and the right-wing slot was bequeathed to Jairzinho.

In a 15-year stay with Botafogo, Jairzinho made 413 appearances and scored an impressive total of 186 goals. In 1974, a short, ill-fated spell in Europe followed with Olympique Marseille, but the Brazilian struggled to settle in France and made just 18 appearances (9 goals) for Olympique.

He returned to Brazil to join Cruzeiro, where he formed part of a Copa Libertadores-winning Cruzeiro side in 1976, playing alongside fellow Brazilian internationals Dirceu Lopes and Nelinho.

Jairzinho featured in the 1974 World Cup, scoring twice, but was unable to inspire Brazil to retain their title without the influence of the great Pelé. The 1-0 defeat to Poland in the third place play-off would be Jairzinho’s last appearance for the national side until he participated in a friendly match held in his honour in March 1982 – rounding off an international career which spanned 81 appearances, 31 goals and a World Cup winners’ medal.

The final significant spell of Jairzinho’s club career came in Venezuela, where he helped Portuguesa set a record of 16 consecutive victories on their way to winning a fourth of five straight domestic titles.

Jairzinho’s career was long and successful, on both a personal and collective level. But his time on the pitch will forever be defined by that one glorious summer at the 1970 World Cup in Mexico. The Brazilian side that he was a part of are still widely regarded as the greatest football team ever assembled; their almost iridescent gold shirts glistening under the baking Mexican sun. Jairzinho, Pelé, Tostão, Gerson, Rivelino and Carlos Alberto would inspire generations of young footballers with their effortless finesse and samba skills. 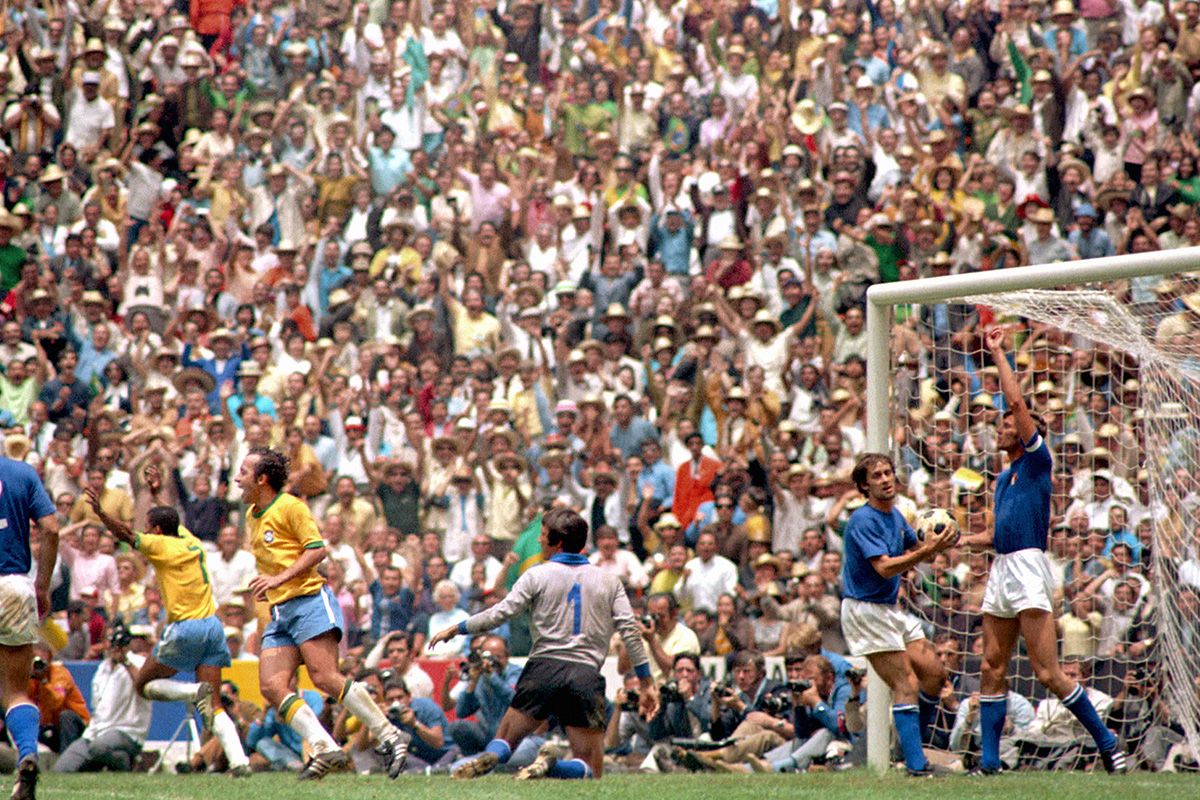 On a personal level, the 1970 World Cup got off to a perfect start for Jairzinho, as he bagged a brace – including a magnificent solo effort in which he beat three defenders before firing into the bottom corner – in Brazil’s 4-1 demolition of Czechoslovakia, adding to earlier strikes from Pelé and Rivelino.

Jairzinho’s next goal was perhaps his most iconic, as he scored the only goal of a narrow group stage victory over reigning world champions England. Bobby Moore and Gordon Banks may have famously been able to thwart Pelé’s goal-scoring endeavours, but the Three Lions were powerless to prevent Jairzinho from rifling the ball into the roof of the net after a measured lay-off from the iconic No.10.

Brazil made it three wins from three group stage matches by beating Romania 3-2 to progress to the quarter-final; Jairzinho’s 22nd minute strike was sandwiched by a Pelé double.

Jairzinho then scored the final goal of the Seleção’s 4-2 win over Peru to progress to the semi-final, where they would meet Uruguay. After falling behind to Luis Cubilla’s 19th minute goal, Brazil supporters feared a repeat of their devastating 1950 World Cup final defeat on home soil to La Celeste. But Mario Zagallo’s men remained calm and fought their way to a 3-1 victory – Jairzinho scoring Brazil’s second in 76th minute.

In the final, Brazil outclassed a strong Italy side, winning by a comfortable scoreline of 4-1. Their fourth goal, scored by captain Carlos Alberto at the culmination of a wonderful team move, may be the most replayed moment of the final, but Jairzinho’s strike – latching onto a Pelé knockdown to smash the ball home from six yards – wrote the winger into the history books.

Having scored in each of Brazil’s seven games, and notching a total of eight goals in the tournament, Jairzinho secured his status as a bona fide World Cup legend.

Captaincy will not improve Luiz…. Arsenal knew and accepted his flaws

David Luiz was supposed to be the final piece of the jigsaw for Arsenal after a successful summer in the transfer market. After securing the likes...

Why Tottenham are interested in the ‘new Rio Ferdinand’

It was always a case of when rather than if Ben Godfrey would reach the Premier League. The only surprise is he’s made it with...

Does United’s James move signal a welcome change of strategy?

If Manchester United make good on their reported interest in Swansea City winger Daniel James and secure the mooted £15million deal, it will be only...

8 Eye-catching European transfers you may have missed

Transfer deadline day has arrived. Although the Premier League and Serie A transfer windows have been shut for some time, most of Europe still had...

Watford bring a season of ‘what might have been’ to a welcome conclusion with a trip to Manchester United on Sunday. Javi Gracia’s side ended...

Why Bayern defender Jérôme is rocking the Boat-eng

Bayern Munich’s Champions League semi-final against Real Madrid was just 33 minutes old when Jérôme Boateng had to leave the field with an injury. He will now miss...

Arsenal host Southampton in the Premier Leagueon Sunday and the Gunners will be brimming with confidence after putting one foot in the Europa League semi-final on...