It often takes some form of a disaster to bring about much needed change, to show that the old tried and trusted method shouldn’t be trusted quite so much any more.

That appears to be the case with Barcelona. The 4-0 humbling at the hands of Paris Saint-Germain last week, in which the Spanish champions were comprehensively outworked and outplayed, is set to spawn a significant tactical shift.

According to Spanish radio station Cadena Ser, Barça boss Luis Enrique is set to abandon his customary 4-3-3 formation in favour of experimenting with 4-2-3-1 ahead of his side’s trip to the capital to take on Atlético Madrid on Sunday.

Aside from a single season of 3-4-3 as Pep Guardiola attempted to crowbar Cesc Fàbregas into his line-up during his final campaign in charge at the Camp Nou, Barcelona have stayed faithful to some form of 4-3-3 for the best part of two decades.

Johan Cruyff ushered in an era of unprecedented success in the early 1990s by utilising a 3-4-3 shape with the Catalan giants, guiding his “Dream Team” to four successive La Liga titles and the club’s first ever European cup.

When Frank Rijkaard assumed the manager’s position at Barcelona in 2003, after overcoming a treacherous first six months, his decision to invert the wingers in the front three — playing the right-footed Ronaldinho on the left, and the left-footed Luis García on the right — set the blueprint for the Blaugrana’s subsequent trophy-laden decade. 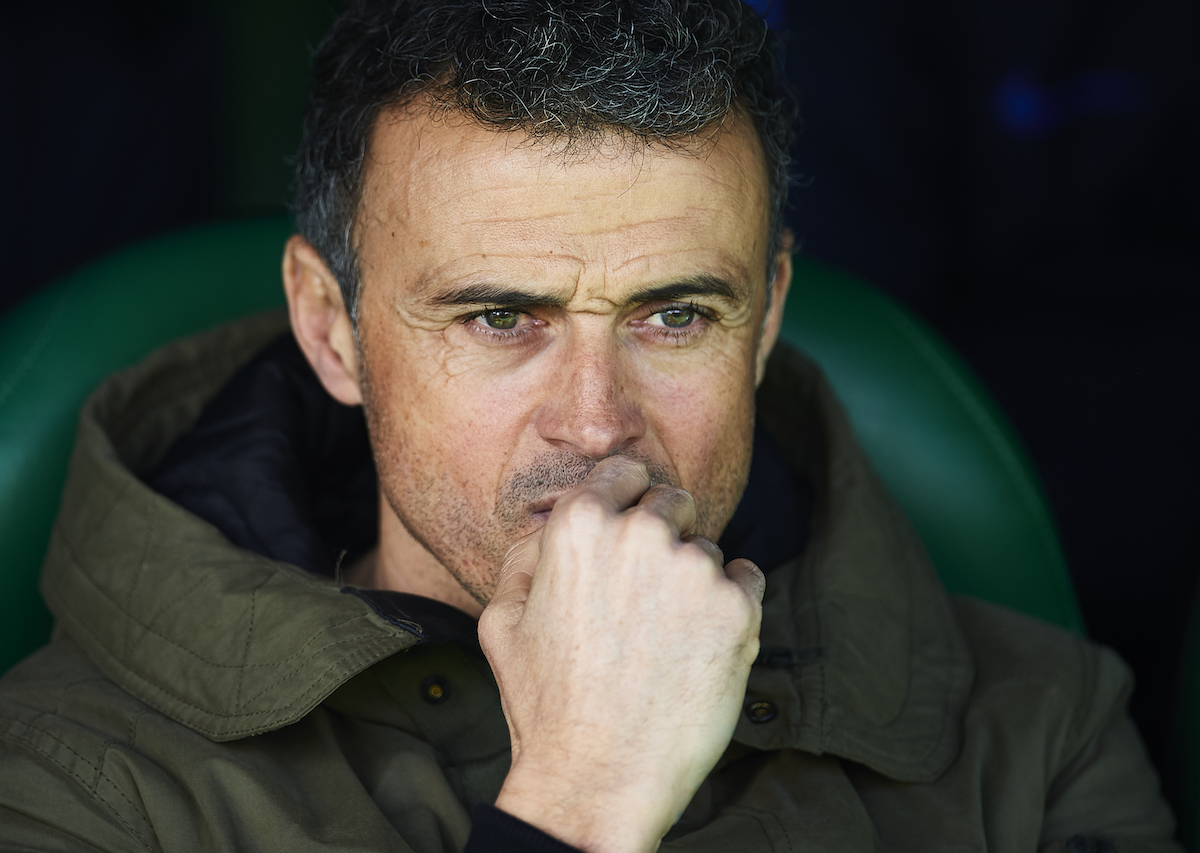 For the most part, Enrique has stayed true to a similar ideal.

Indeed, he even moved Lionel Messi back out to the right from the false nine role he had thrived in under Guardiola. The switch, made at the tail end of 2015, helped rejuvenate the little Argentinian genius, who has produced arguably the best form of his remarkable career since then.

But there can be no doubt that things have gotten stale for Barça this term.

They spent big in the summer on bolstering their squad with several young and versatile additions, rather than focussing on splashing the majority of their yearly budget on a single superstar arrival.

But many of the new recruits have yet to truly settle, while, seemingly giddy at the prospect of being able to introduce a squad rotation system, Enrique’s erratic selections have been to the detriment of the team.

Although they easily navigated the Champions League group stage, are in the Copa del Rey final and well positioned to mount a defence of their league title, there were signs that a result such as that which they suffered at the Parc des Princes was on the cards. 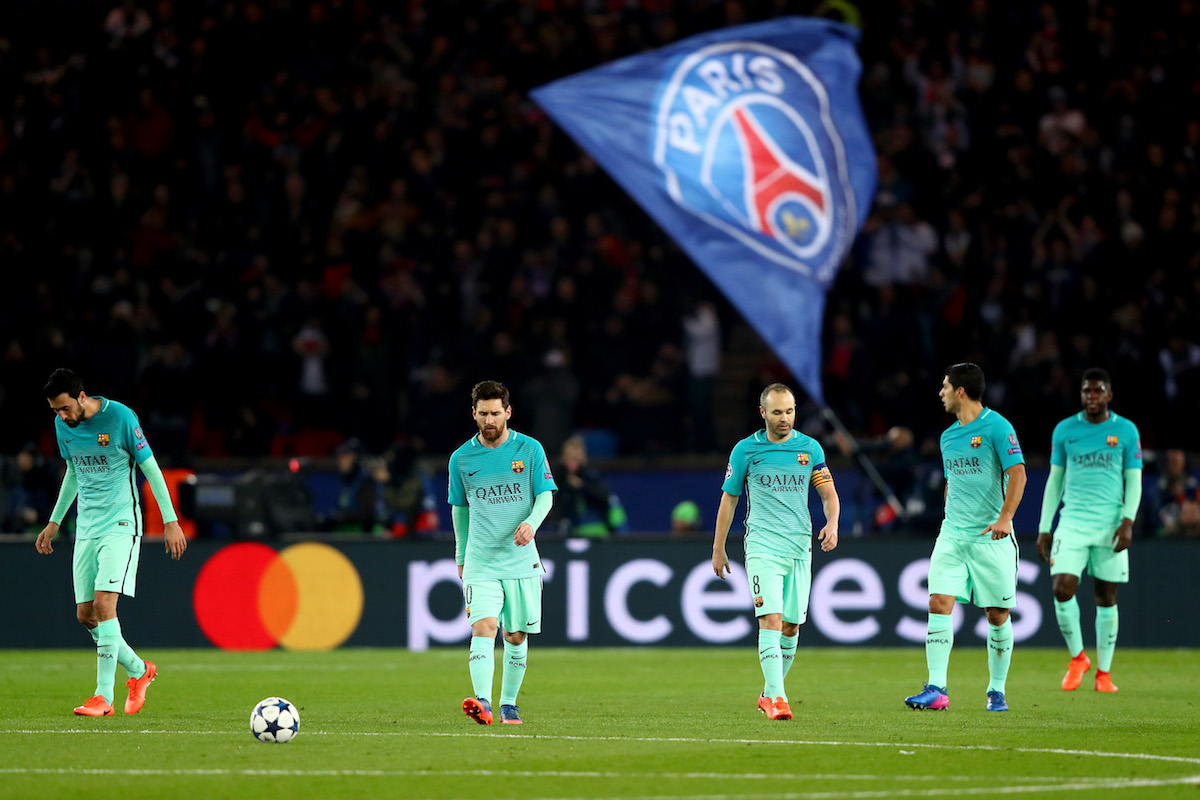 Then, rather than bounce back from their European humiliation by doling out a pounding to whichever domestic opposition was unlucky enough to next cross their path, Barcelona limped to a 2-1 victory over 17th placed Leganés at the weekend, needing a last-minute penalty from Messi to spare their blushes.

So a change is needed. And if 4-2-3-1 is what Enrique has decided is the logical solution, there are a couple of obvious questions that the switch poses.

Who will make up the double pivot?

The back four will likely remain largely intact, with Sergi Roberto the only option to start at right-back following Aleix Vidal’s ankle injury, Lucas Digne and Jordi Alba vying for the left-back spot, with two of Gerard Piqué, Samuel Umtiti and Javier Mascherano occupying the central defensive roles.

The matter of who should line up in front of them is less certain.

Sergio Busquets, the long-time pivot of the Barça midfield, will undoubtedly take up one for the two anchoring roles in the middle of the park.

The 28-year-old is the best in the world at what he does, protecting the back four by intercepting and breaking up opposition attacks, while also springing offensive moves with accurate and incisive forward passes.

Although the Sabadell-born midfielder is more accustomed to being the sole conductor at the base of the Camp Nou midfield, he does have experience playing in a double pivot for Spain. With Xabi Alonso at his side, Busquets won the World Cup in 2010 and the European Championships in 2012.

The question of who should partner Busquets will likely have a different answer depending on the opposition. In games where Barça are not expecting to be troubled too much defensively, captain Andrés Iniesta could start in that deeper role. 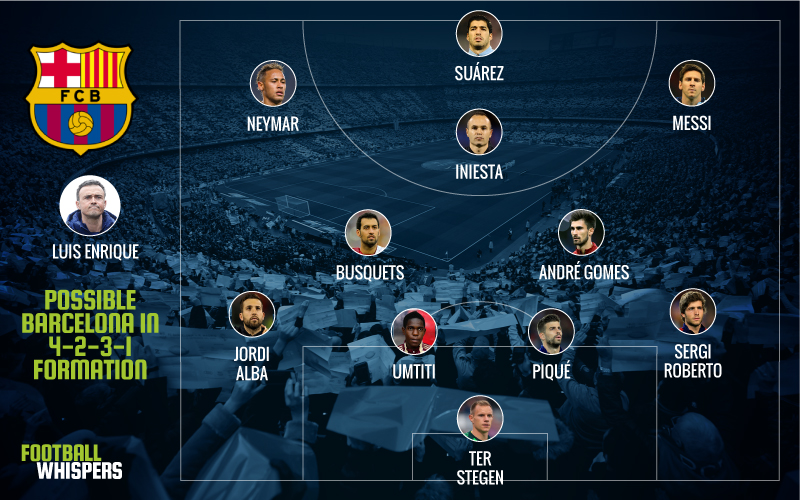 Iniesta is one of the finest midfielders in modern football, and has thrived in the interior role on the left of Barcelona’s midfield three. But he hasn’t always played there. He initially became a regular feature of the first-team as a replacement for Ludovic Giuly on the right wing under Rijkaard, while he has also often lined up on the left of the front three.

But, in the 2006 Champions League final against Arsenal, Iniesta was a half-time substitute, coming on to play as Barça’s pivot and orchestrating a dramatic 2-1 victory for his side. So Iniesta is able to play in a deeper position if required and, at 33, he might benefit from the reduced amount of running demanded of him in a double pivot role. 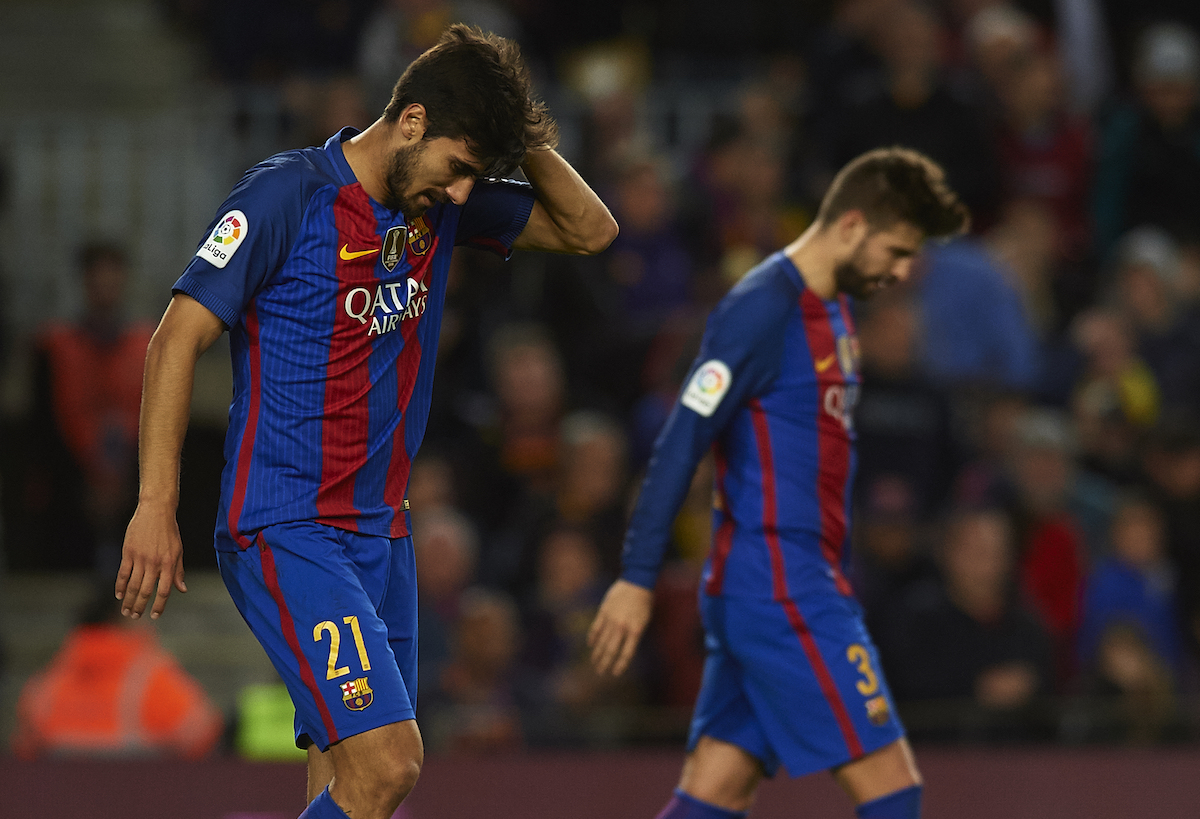 Alternatively, André Gomes, a €55million summer signing from Valencia who has flattered to deceive thus far in Catalonia, could play alongside Busquets as a deep-lying playmaker.

The 23-year-old Portuguese international has rarely shown it to date in a Barça shirt, but he is blessed with superb passing technique and an intelligence which could see him pull the strings from deep in midfield.

However, if Enrique views a prospective opponent as posing a particularly fierce or physical threat, then former Liverpool destroyer Mascherano could be restored to a defensive midfield role, having spent the majority of his Barcelona career as a centre-back.

There is no danger of the 32-year-old being out of practice as a midfielder, as he still lines up in the centre of the park for Argentina. He may not have the passing range of Iniesta or Gomes, but his combativeness and defensive instincts could prove invaluable on one-off occasions.

Who plays on the right wing?

One key switch that a change for 4-3-3 would bring about is the transformation of Barça’s famous “MSN” front three of Messi, Luis Suarez and Neymar into a front four.

Although Messi’s starting position has been on the right of the front three for the best part of the last two years, he has gradually shifted further and further infield in recent months, with Neymar dropping slightly deeper meaning Barca are almost in a 4-4-2 formation when in possession. 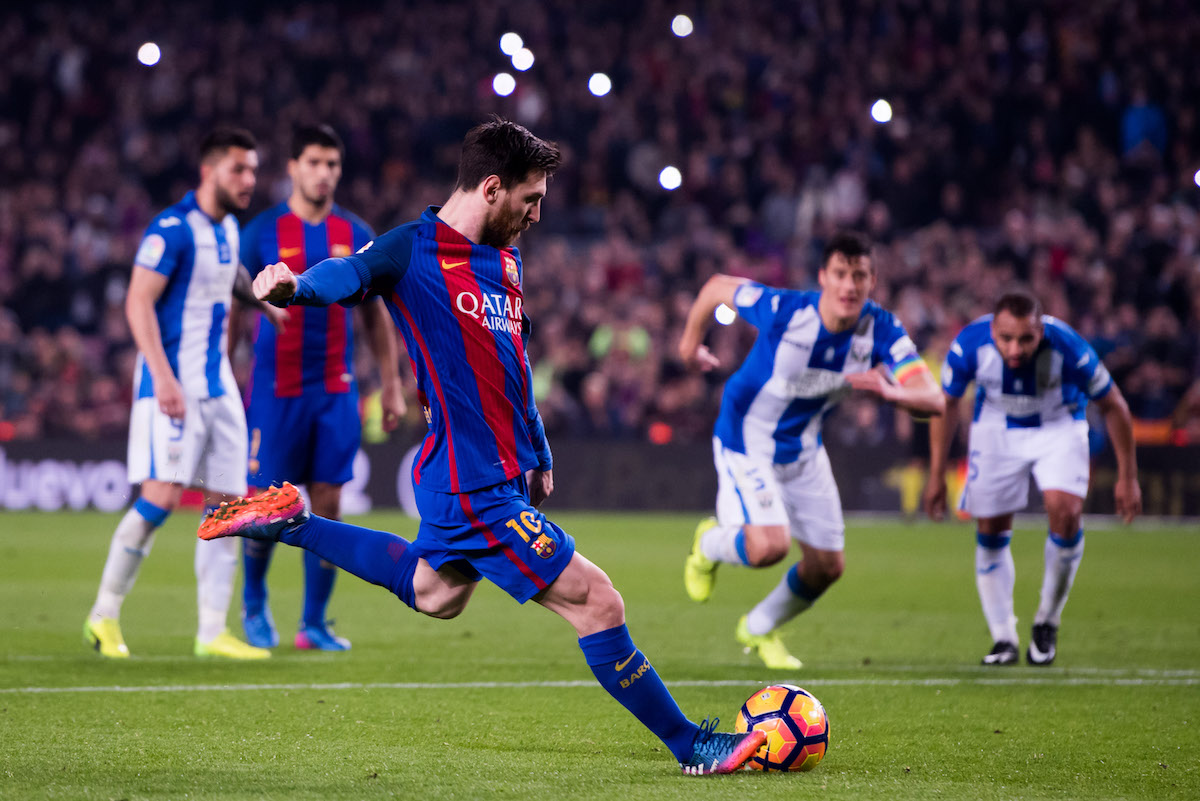 Playing Messi on the right in the new 4-2-3-1 is certainly and option, and Iniesta would likely be the prime candidate to come into the central No.10 role.

But the presence of a central attacking midfielder inside of him would mean that Messi’s path into the zones he prefers to operate in would be blocked, confining him to a more conventional winger’s duty.

So it is much more likely that Messi would start centrally and someone else would come in on the right, but who?

Rafinha has stepped up his development this season, showing his ability to perform in a variety of different roles, and becoming one of the most trusted deputies in Enrique’s squad.

With his dribbling ability, eye for a goal and flawless technique, the Brazilian international would be a fine fit to play as an inverted winger on the right side, cutting in onto his left foot and linking with Messi without feeling the need to hog the central zone the Argentinian favours.

Perhaps an even better fit for the position would be Arda Turan. Although the system was vastly different, the Turkish attacking midfielder came to prominence on the right side for Atlético Madrid. 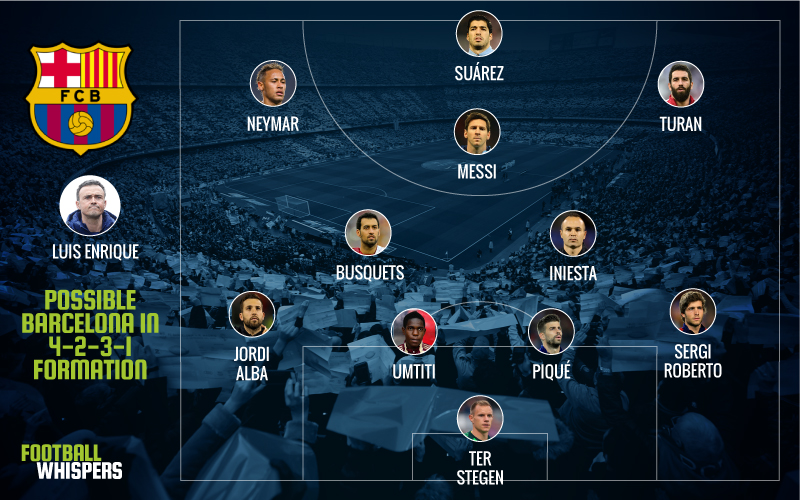 With Los Colchoneros he demonstrated a tenacity to engage in one-on-one duels with opposing full-backs, the drive to break forward around the outside of his marker, and the instinct to time runs to the back post when the ball was on the other side of the pitch.

Thanks to the presence of Messi, since joining Barça in 2015 the 30-year-old has largely deputised for Neymar on the left of the Blaugrana’s front three, or filled in as an interior.

With Messi shifted centrally, Turan would offer Barcelona balance in both the attacking and defensive phases of play, thanks to his willingness to press and track back, and ability to get into scoring positions when his side break forward.

Racking up an impressive tally of 13 goals from 27 appearances this season, Turan has made a strong case for greater involvement; the prospective switch to 4-2-3-1 could be his chance.

Chelsea can’t sack Sarri; they need him more than ever

It would not be at all surprising, given Chelsea’s recent track record, if Maurizio Sarri were to leave for a new challenge this summer. The...