Arsenal’s title hopes were dented as Watford went to the Emirates and took all three points on Tuesday. It couldn’t have come at a worse time for Arsene Wenger.

The knives are now back out for him as arguably the most reactive fanbase on the planet try to process a loss to a team who had previously won just one Premier League game in 10.

The situation was exacerbated due to the fact no new senior faces arrived this month, and it appears as though the club believe they have enough paper to mask the cracks in the squad.

But do they even have enough to ensure Champions League football next year, in what’s quickly becoming the most competitive season in recent memory?

The problems do not stem from the attack, according to Wenger, who has declared that the offensive firepower is the best he’s had during his time at the club.

“Yes. I think certainly numbers-wise and quality-wise together,” said Wenger.

“We had never had so many players who could perform and score goals  certainly never.

“We had Bergkamp, Henry and after that (Robin) van Persie behind, (Sylvain) Wiltord, (Robert) Pires…it was not bad. They had the quality but now we have a large number.”

However, it’s not the attack that threatens to derail their challenge. In their last four league matches they’ve conceded six goals, an alarming number considering the opposition in those matches were Bournemouth, Burnley, Swansea and Watford. Conceding an average of 1.5 goals per game against relegation-threatened and mid-table sides is an issue no matter how you look at it. 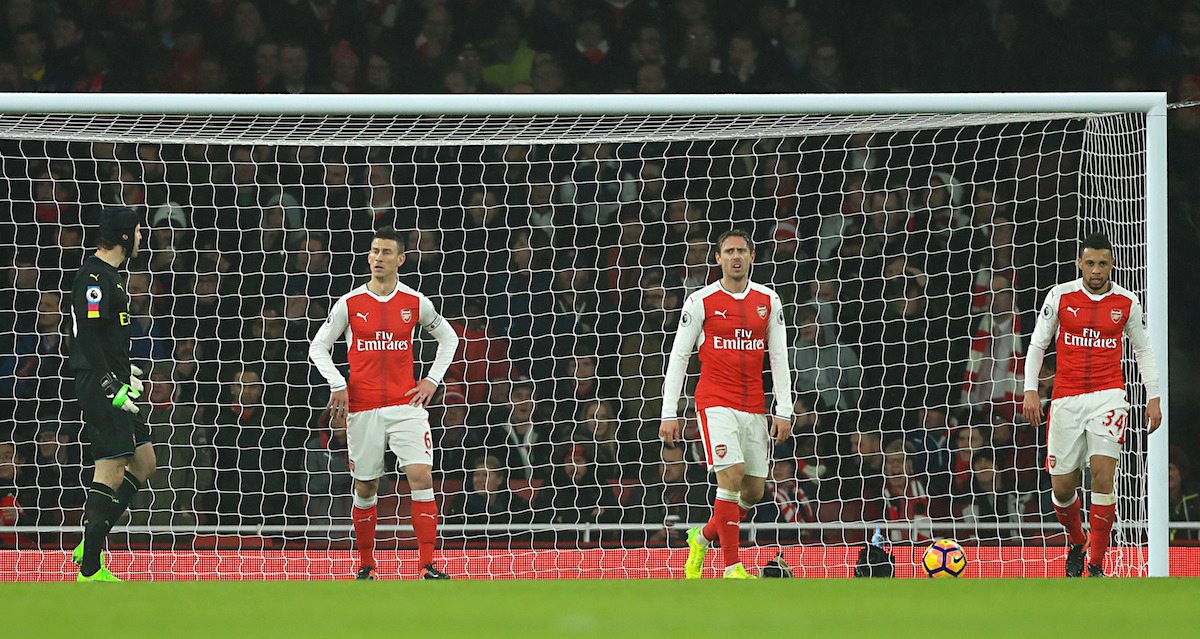 They dropped five points in those aforementioned matches. Had they done the job and picked up maximum points they’d sit clear in second position and just four points behind Chelsea with an all-important match against Antonio Conte’s men this weekend.

Oh what could have been.

The Need for Defensive Reinforcements

The January market is notoriously difficult to navigate but that’s not to say it’s impossible to find value for money, especially when you have Champions League football on offer like Arsenal do.

The centre-back pairing of Shkodran Mustafi and Laurent Koscielny is one of the better ones in the league but the problem lies with the quality of deputies in this area. Koscielny is prone to picking up injuries and when this happens the quality on show dramatically declines. 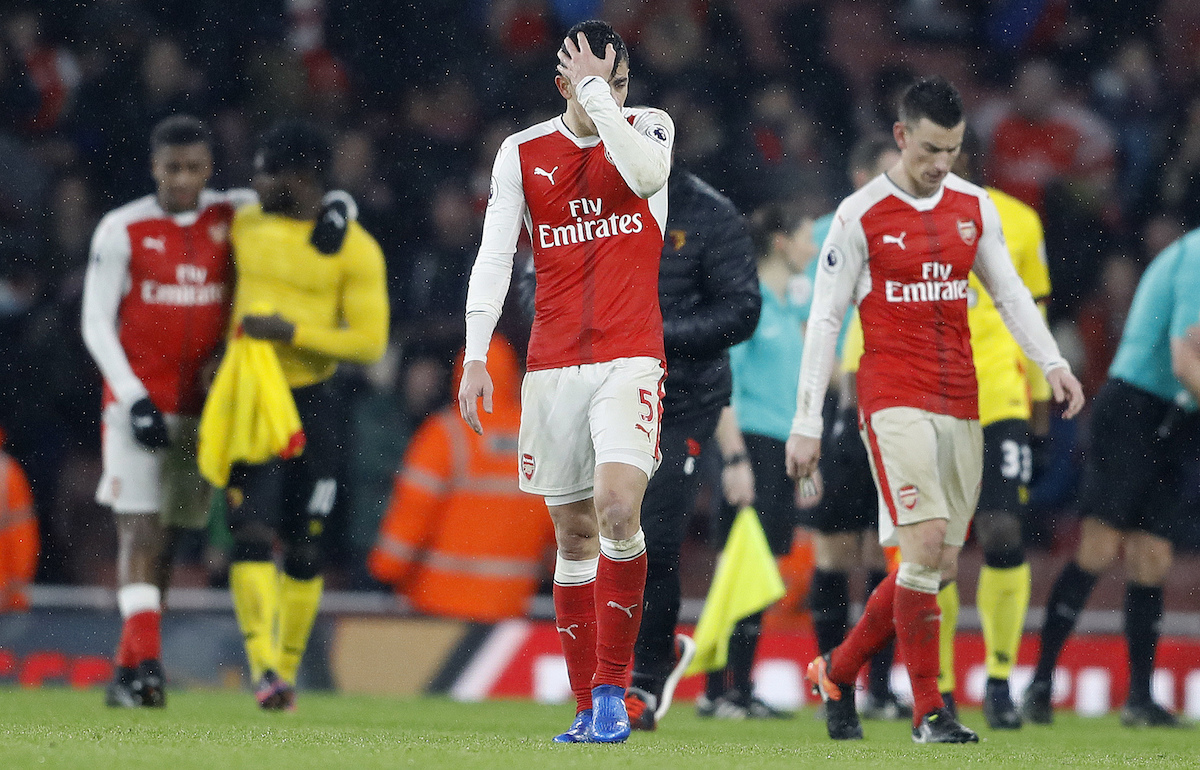 Per Mertesacker isn’t the dominant defender he once was and at 32 years old he isn’t getting any younger. Gabriel, who cost the club a reported £12million in 2015, has really failed to kick on and doesn’t appear to be well suited to the rigours of the English game.

It’s a squad game these days.

Kostas Manolas is said to be a target for the summer window, the potential move is a 2.3 on our index, but will Arsenal rue not acting in January if they miss out on Champions League football come what May?

The left-back conundrum at Arsenal 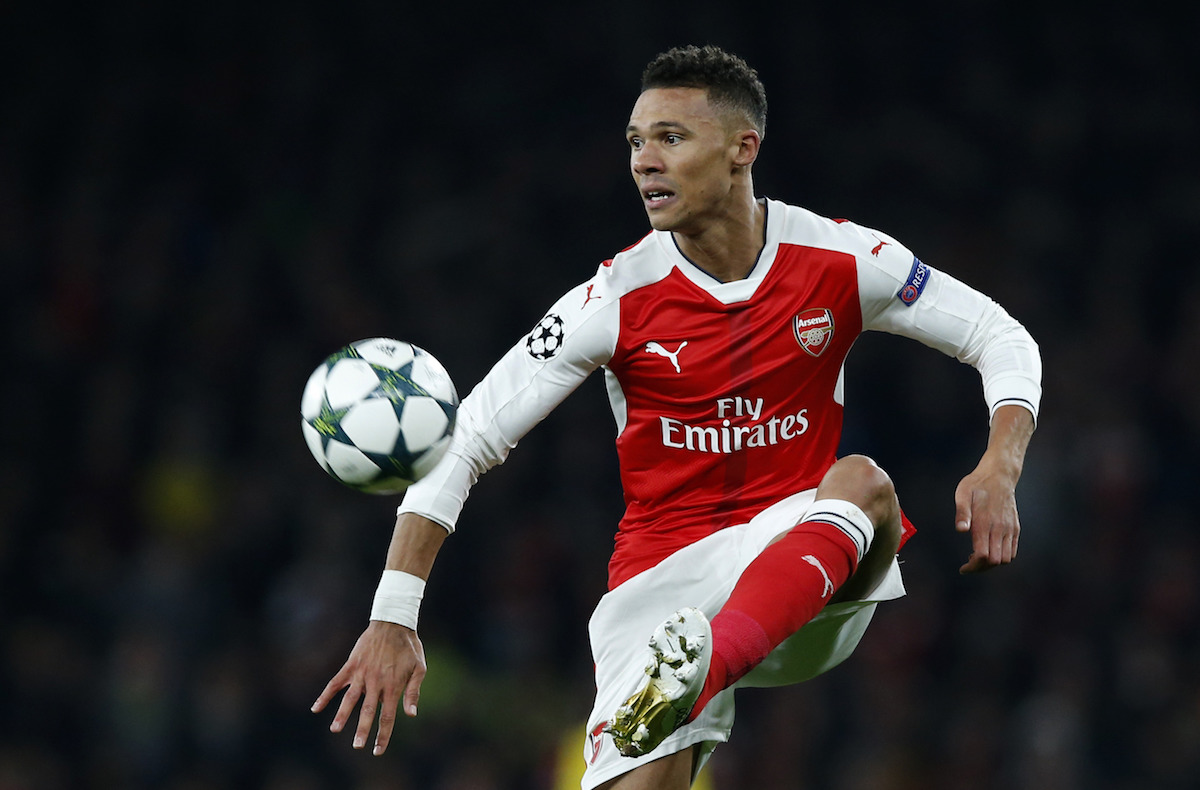 Question marks hang over the head of Kieran Gibbs. He was supposed to be the heir to Ashley Cole but injuries have hindered his development. He’s now 27 years old and has failed to cement his place as a starter in the Arsenal team.

Gibbs was a reported target for Crystal Palace in January but a move failed to materialise. With just 18 months remaining on is current deal it may be that he has to move in the summer if he’s got aspirations of being a starter anytime soon. In the pecking order he’s behind 30-year-old Nacho Monreal and the Spaniard is hardly the most stable of full-backs. 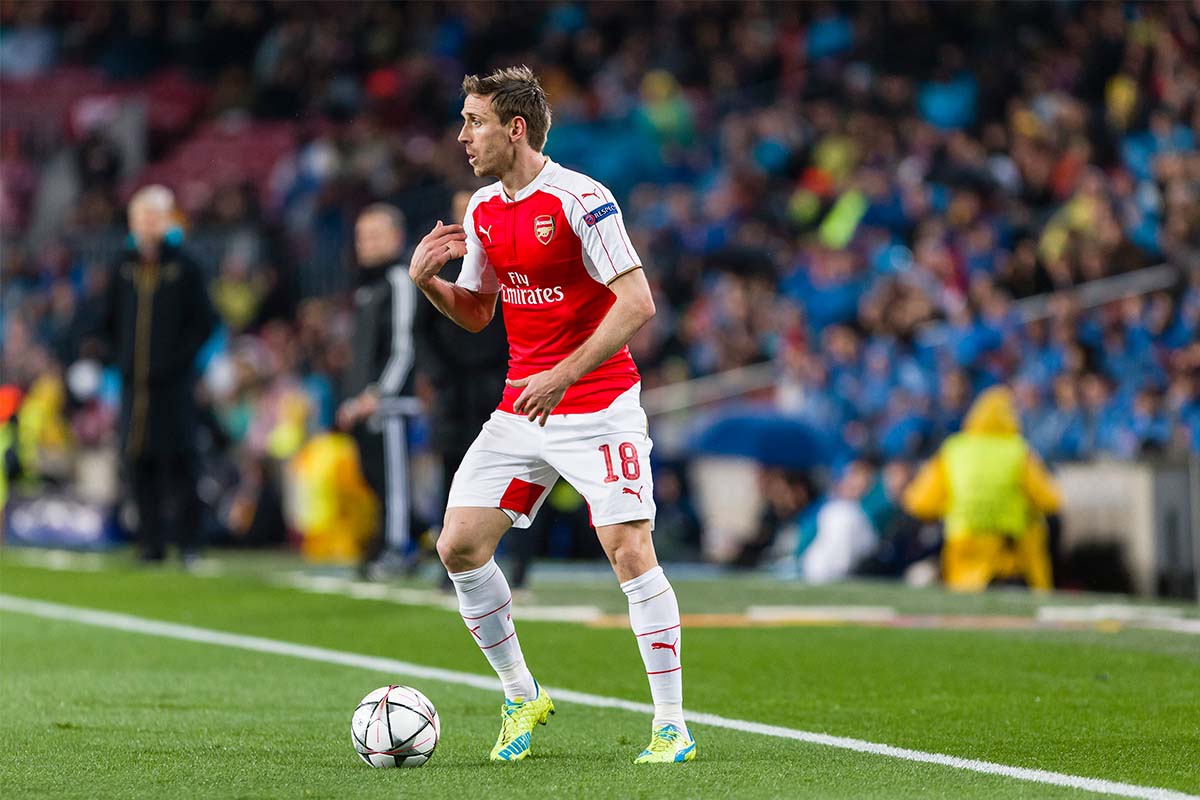 There’s a myth that’s been built up around the former Malaga man. He’s seen as one of the most underrated players in the Premier League yet offensively he offers very little and his stats are dwarfed by Hector Bellerin on the right. Defensively he leaves a lot to be desired and he should be considered a weakness. He does a job when the team are dominant but should a club the size of Arsenal be settling for players when they could go out and improve on them? 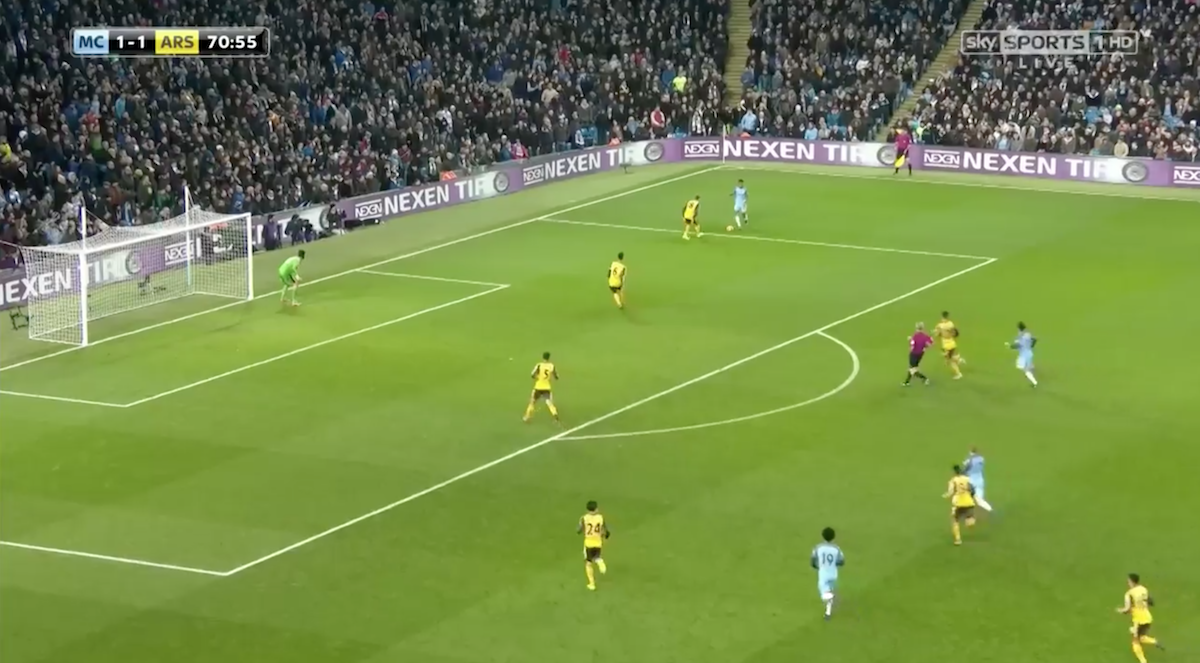 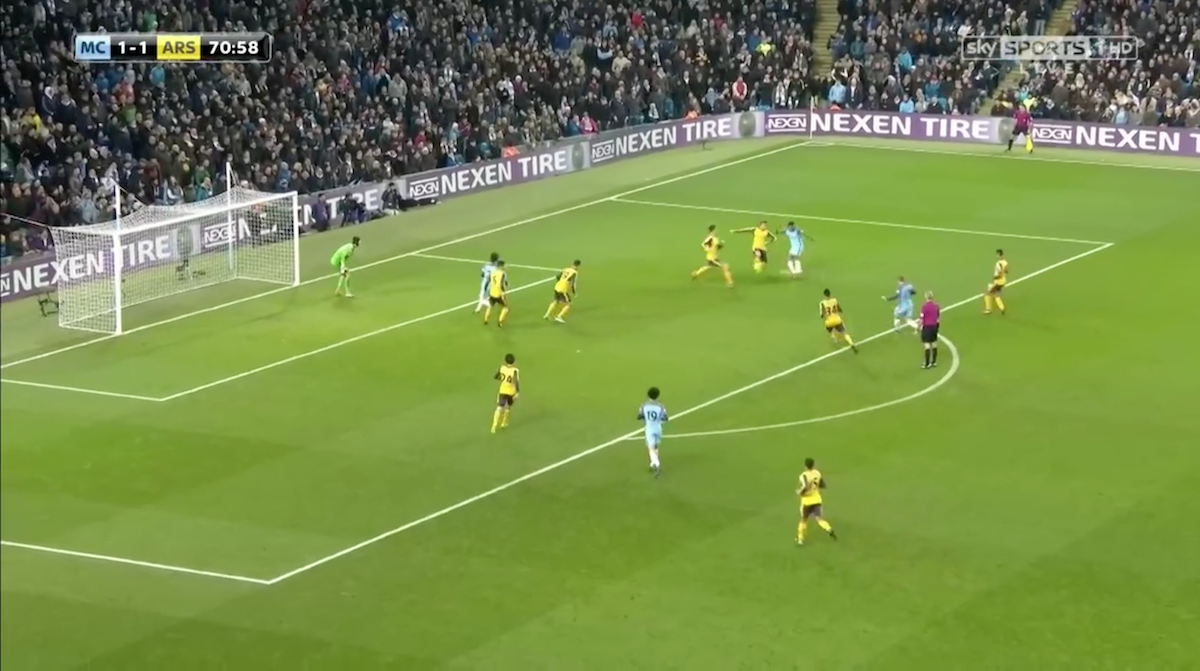 It may be slightly extreme to lay the blame squarely at the feet of Monreal for the Manchester City winner in December, but at the same time it doesn’t absolve him of any guilt. As shown in the first picture, you’re often taught to show the man onto their weaker foot and the Arsenal man does just that. Unfortunately for him he’s not quick enough to block the shot as Raheem Sterling shifts it onto his left foot and fires home.

However, there are some instances in which you hope common sense would prevail. This is one of those times. Why doesn’t Monreal force Sterling to go on the outside? There’s not much space for him to operate in, there’s cover behind him in Koscielny and there’s nobody in the area for the City man to pick out if he does get to the byline.

There’s a common misconception surrounding just how important full-backs are to a system. Many feel it’s just a space to be filled and most are just frustrated wingers but it couldn’t be further from the truth. Some of the best teams in the world use systems which rely on the full-backs. Arsenal, to an extent, are no different. They ideally need to clone Bellerin. 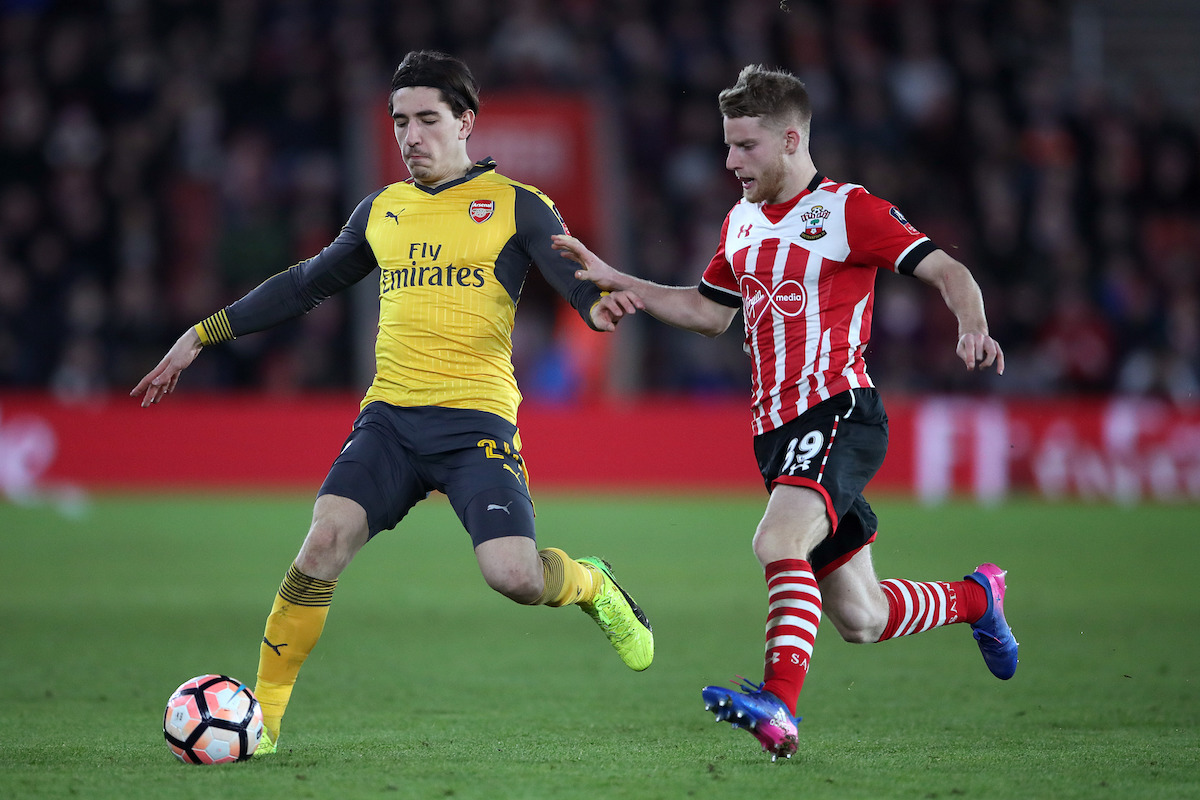 They did bring in Cohen Bramall. The 20-year-old left-back cost the club £40,000 when he signed from Hednesford at the beginning of January. It would be a fairytale story if he was able to develop into a starter for the club but it’s leaving a lot to chance. Arsenal, with the finances they have, don’t need to take such chances.

When will Wenger address the left-back issue?

Whether or not the top teams in the Premier League should have strengthened in January was a topic on episode nine on Football Whispers TV.

Despite a winless run of four games in all competitions following the restart of English football last month, only the harshest of critics would consider...