Say what you want about Emmanuel Adebayor’s ability as a footballer, but he is a player that sparks debate and opinion across the country. The Togolese striker scored goals for Arsenal, Manchester City, Tottenham Hotspur and will forever sit high on the list of Premier League goal-scorers.

In 315 appearances, including 15 for Crystal Palace, Adebayor found the back of the net 124 times. With 97 scored in the Premier League, that puts him above Ruud van Nistlerooy, Peter Crouch, Dimitar Berbatov and Kevin Phillips on the all-time charts. Now, French side Montpellier HSC are looking to add the veteran to their squad in search for goals in the second half of the season.

La Paillade, who, against the odds won the 2011/12 Ligue 1 title, currently sit 11th in the table, but are just three points off the relegation zone going into the winter break. The nature of the league, there are a lot of clubs all clumped together and having a goal-scorer can make the difference between the top half and dropping to Ligue 2.

Montpellier thought they had that in Casimir Ninga, but in October they lost him to a ruptured knee ligament and he will miss the rest of the season. The Chadian international scored seven goals in 26 games last term and after starting slow this season, he exploded before his injury.

A hat-trick against Dijon in a 3-3 draw was followed up by a double and an assist in the 3-2 win over SM Caen. Just as he was hitting form and showing his potential, the 23-year-old was struck down.

Frederic Hantz’s side has struggled since, but every so often, like when they beat PSG 3-0 at the Stade de la Mosson, they show signs of life. However, defeats to Lille and Nantes in the league – both who were below them – and Les Canaris again in the Coupe de la Ligue, the clubs needs to make a move.

“Due to the unavailability of Ninga, it seems useful to sign a good striker to improve our results, Hantz told L’Equipe this week. “If it’s Adebayor, I’ll do my best to make him as good as possible. If it’s someone else, I’ll do the same thing.”

Adebayor’s career started in France, coming through the youth ranks at FC Metz before moving to AS Monaco in 2003. The Togo forward has scored 13 goals in Ligue 2 before making the step up, then 17 league goals in two seasons with the Monegasque club lead to Arsene Wenger raiding his old club for the centre-forward.

Undoubtedly, he is a player that splits opinion wherever he turns up. Patches of good form show the good side of the player, but it seems when things go against him, any professionalism goes out the window and a good relationship can turn sour and to a place that cannot be fixed.

“The moment Adebayor is not playing, he has an issue with the person responsible. It’s an ego thing,” Jermaine Jenas wrote back in January. “That then puts pressure on a manager to show his authority. And once Adebayor falls out with the manager, it’s game over. There is no reconciling that situation.”

“Ade never caused problems in the changing room. He’s not that type of person. But he would be very honest with the manager and the club if he wasn’t happy, and that would start to show in his performances,” Jenas continued. “At Tottenham he ended up being injured a lot of the time. Maybe it was legitimate, or maybe he was just downing tools. Either way, he’s not a player who sees himself as someone who comes off the bench. He demands to be the top striker.” 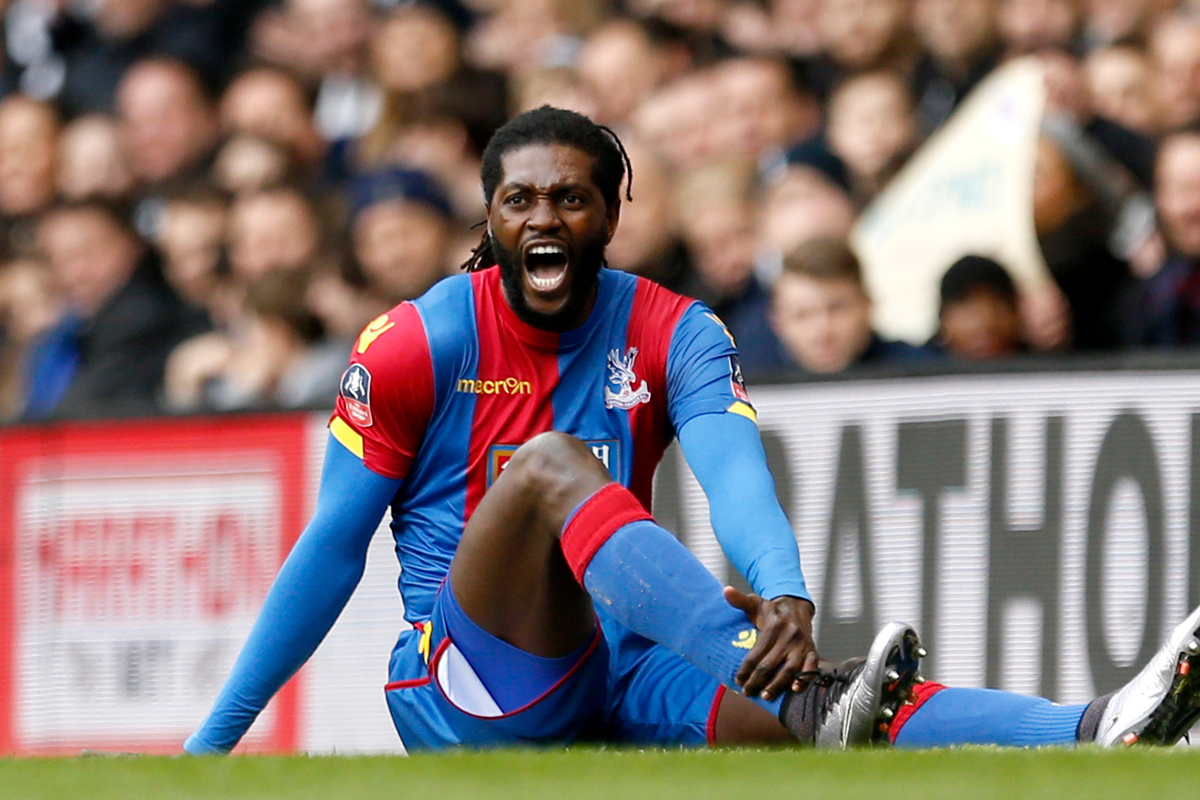 Although he is still only 32 years old, it feels like he has been around for a lot longer. A free agent since his deal with Palace ran out on the 1st of July, his last professional goal came on the 13th of February against Watford. He would play nine more times, all without scoring, before the end of last season.

It was heavily expected that Olympique Lyonnais, on the look for an experienced forward, would sign him in the summer. Even after stories of a fake meeting, a deal couldn’t be finalised and OL went with Chateauroux youngster, Jean-Philippe Mateta, instead.

One massive stumbling block would be the 2017 Africa Cup of Nations. Adebayor will be there to represent Togo, but that would make him unavailable for all of January and possibly the first week of February. That’s at least four league games.

It’s a double edge sword, with the striker set to use the competition to find match-sharpness and show the world that he is still capable of performing at the top level. However, Montpellier need someone now, not midway through February.

President Louis Nicollin, famous for speaking his mind, is far from convinced: “We do not really want to, he told L’Equipe. “Enough has been spent this year. It seems he would prefer to look for a defensive replacement for the 27-year-old Vitorino Hilton, rather than an ageing, inconsistent forward.

Nicollin is right to be apprehensive, at Palace, Adebayor was reportedly on around £70,000 per week. Montpellier’s top earner, Morgan Sanson, is on just over £21,000 a week. Any deal for the former Spurs striker would either need to see him take a huge pay cut, or the French club gamble on their Ligue 1 safety to match his demands.

If you were signing the striker that scored at least 10 goals a season when he made 20 appearances, then it could be a beneficial move. One goal in 15 Premier League games for Palace rings alarm bells.

Adebayor is without a club, so you would think that he would expect any level of deal to play again. Yet, one word you often get with the 32-year-old, is mercenary. With the Chinese Super League clubs always looking for a deal, there’s more chance of forward holding off and hoping for a big money move.

That is definitely not going to come from Montpellier and to ensure their Ligue 1 survival, it may be smart for the southern club to turn their attentions elsewhere.