Chelsea headed into October on the back of a 3-0 defeat to Arsenal and without a win in three Premier League matches. There was talk he was set to be replaced and some bookies even stopped taking bets on his dismissal. There was an air of inevitability. After all, it’s not like Chelsea owner Roman Abramovich is a stranger to prematurely ending managerial reigns at the club. There’s a long list of Chelsea managers who haven’t been able to see out their contracts at the club.

But as October creeped into November, the outlook on Conte as Chelsea manager had completely changed. Chelsea went from winless in three to undefeated in four. From one clean sheet in the opening seven matches to four consecutive clean sheets. The Blues are now just one point off the top of the Premier League and are one of the most in-form sides in England.

Many may argue that all that was needed here was patience and that a manager of Conte’s quality was always going to be a success. While that may be true Conte wasn’t going to take any chances and instead of putting all of his trust in the cliched “form is temporary class is permanent” quixotic argument he made changes. He went to a tried and trusted system, one that served him well as Juventus boss and when he was the manager of Italy. 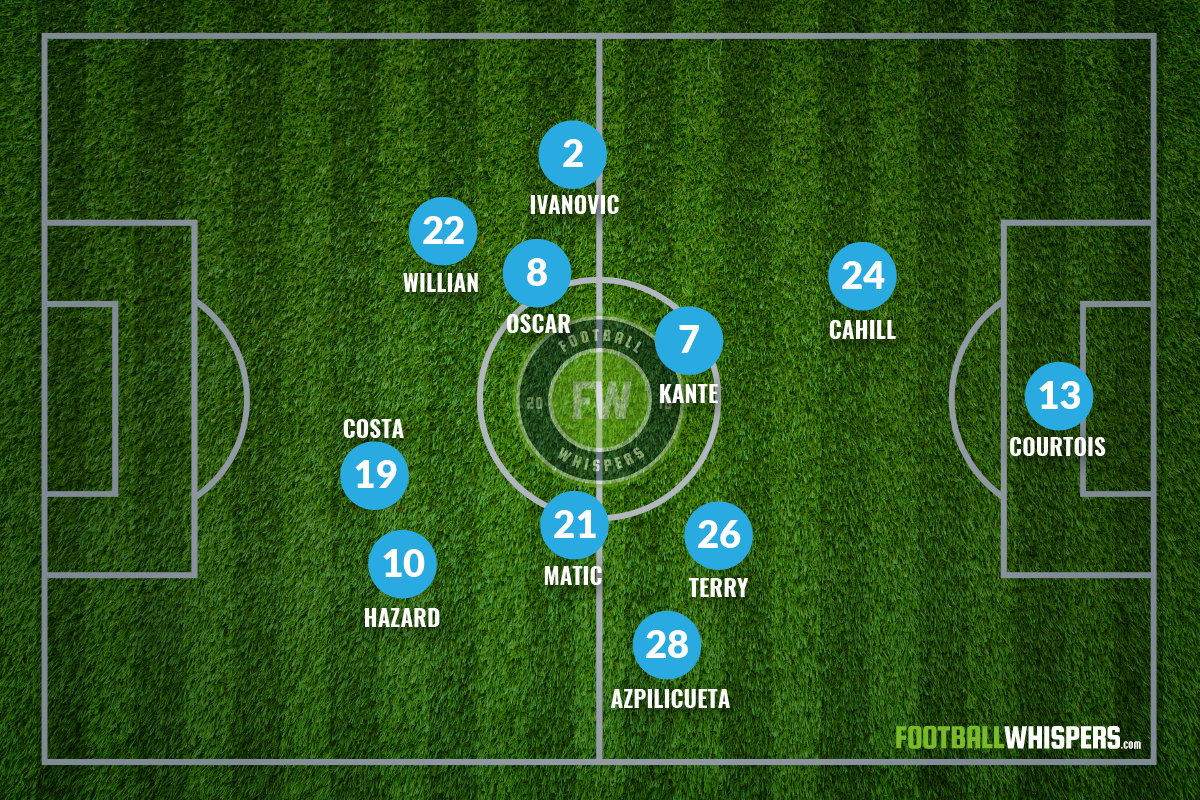 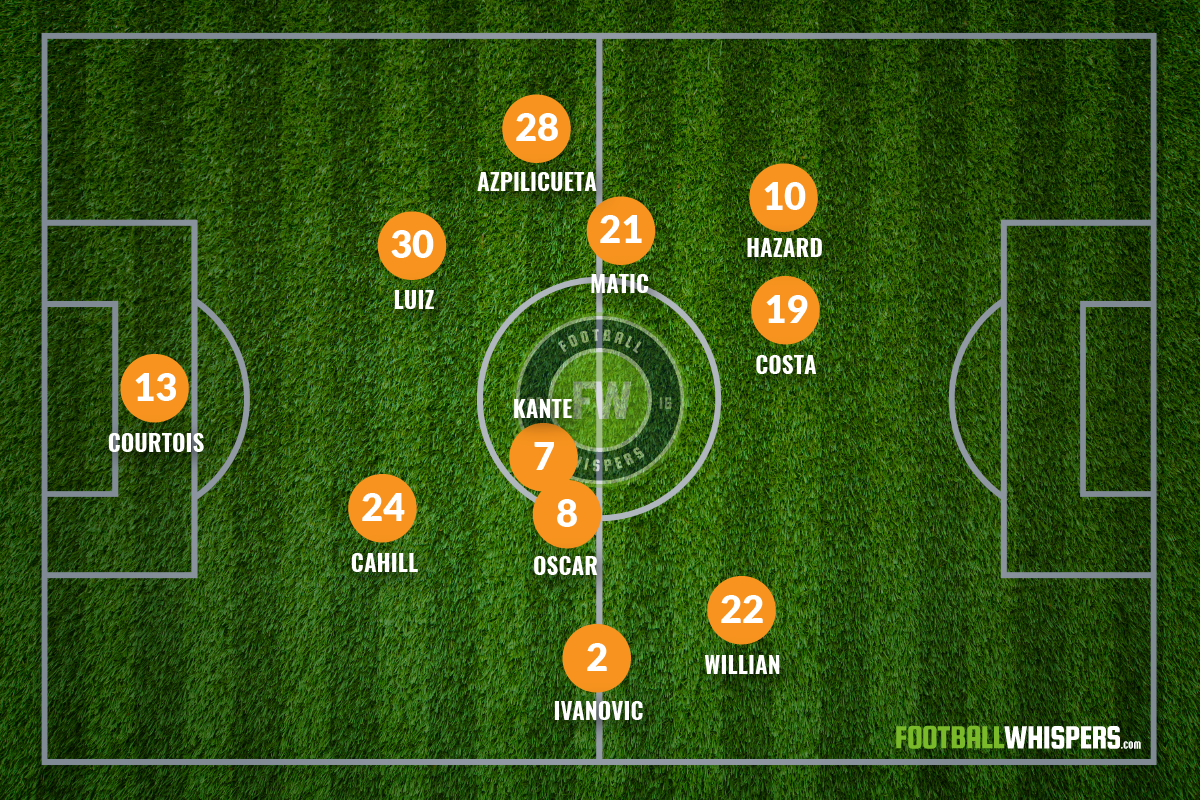 At the start of the season Chelsea initially lined up in hybrid 433/4231 system with Nemanja Matic, big money signing N’Golo Kante and Oscar as the midfield three behind an attack of Diego Costa, Eden Hazard and Willian. This tactic worked to an extent with Chelsea winning their opening three games of the season but they were far from convincing in the 2-1 victories against both West Ham and Watford. Whatever it was wasn’t clicking.

The next three league games saw Chelsea draw 2-2 with Swansea, lose 2-1 at Stamford Bridge to Liverpool and then round off their woeful run of matches with a 3-0 loss at the hands of Arsenal in what many described as a training match for the Gunners.

Then it happened. Conte rekindled his love affair with the 352/343 formation and the Chelsea team instantly started to reap the rewards. Some may feel Conte went into safe mode and put more players behind the ball but the Italian manager wanted to give his side solid foundations. The fact Conte acknowledged it wasn’t working and changed it early on in the season should be applauded. Many others in his place would have persisted with it and carried on with the inconsistent performances citing the team had clear potential before reeling off the wins they’d had that season. 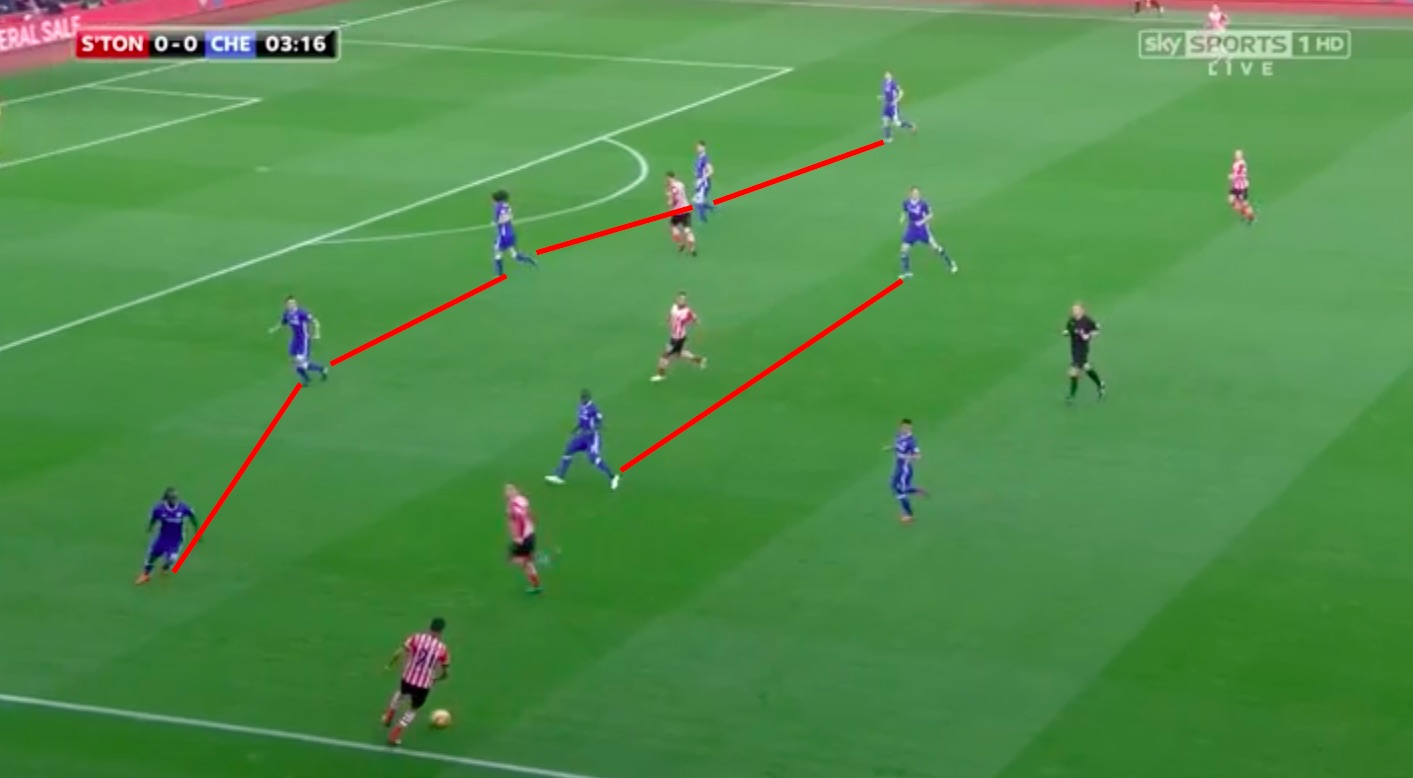 The picture above shows Chelsea’s shape when defending. Victor Moses and Marcos Alonso are the wing-backs with Cesar Azpilacueta, David Luiz and Gary Cahill as the three centre-backs. Then they have N’Golo Kante and Nemanja Matic shielding the defence. Chelsea are not only compact, they are also narrow which suffocates the opposition of any space centrally. 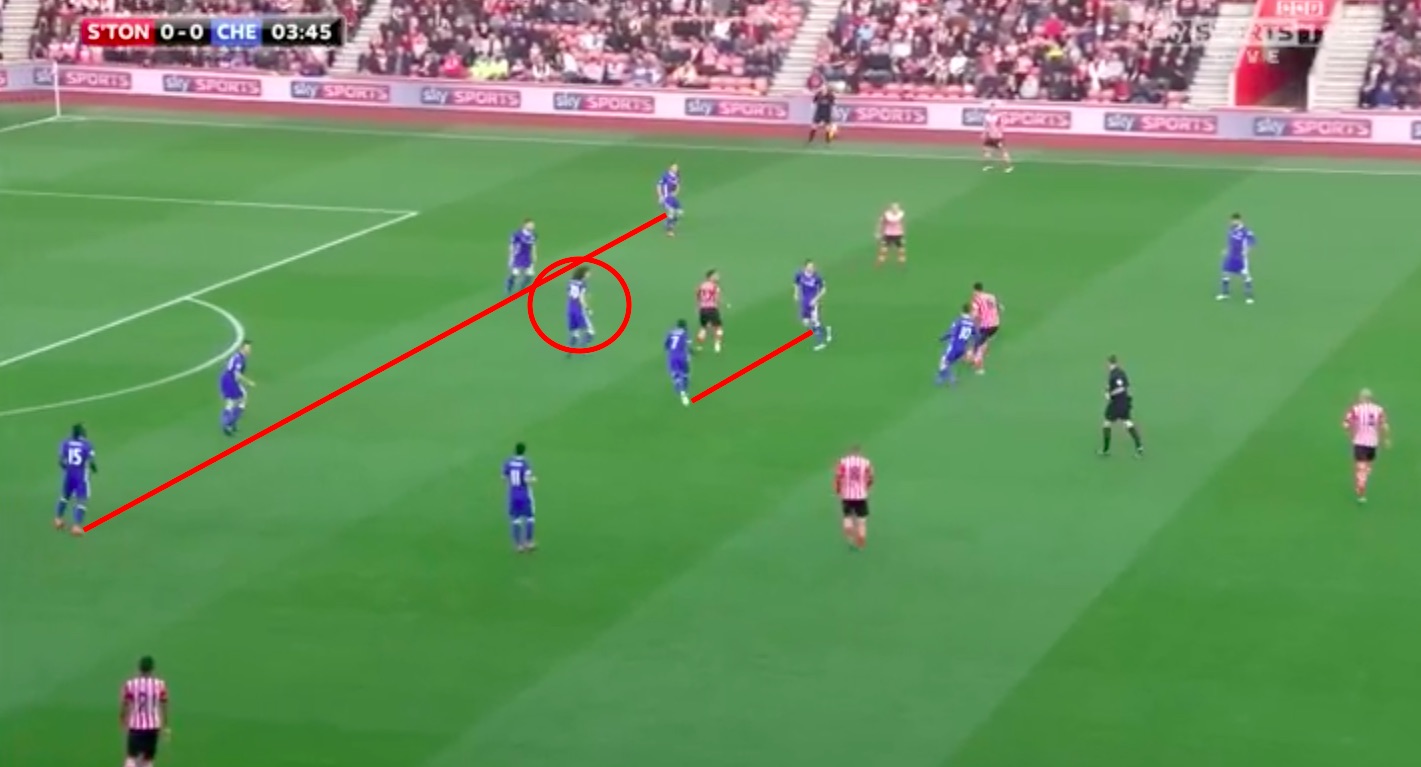 As Southampton look to work the ball to create an opening Chelsea bring all 10 outfield players back into their own half meaning the spacing from centre-back to striker is approximately 20/25 yards. Their suffocating the space that Southampton want to play in. What’s interesting though is how David Luiz, the middle centre-back of the three, steps up and almost act as a defensive midfielder behind Matic and Kante. It nullifies the space the Southampton player between the two Chelsea midfielders would usually have and means the player in possession is reluctant to attempt such a pass because it’s unlikely they’d retain possession with the away side having positioning three players that area. It also means that depsite Southampton being in Chelsea’s final third they still have to play through four lines of Chelsea defence to get in on goal. The first line of defence is Hazard and Pedro, then they have Matic and Kante, then a rogue David Luiz and then the back four. It’s difficult to break down. 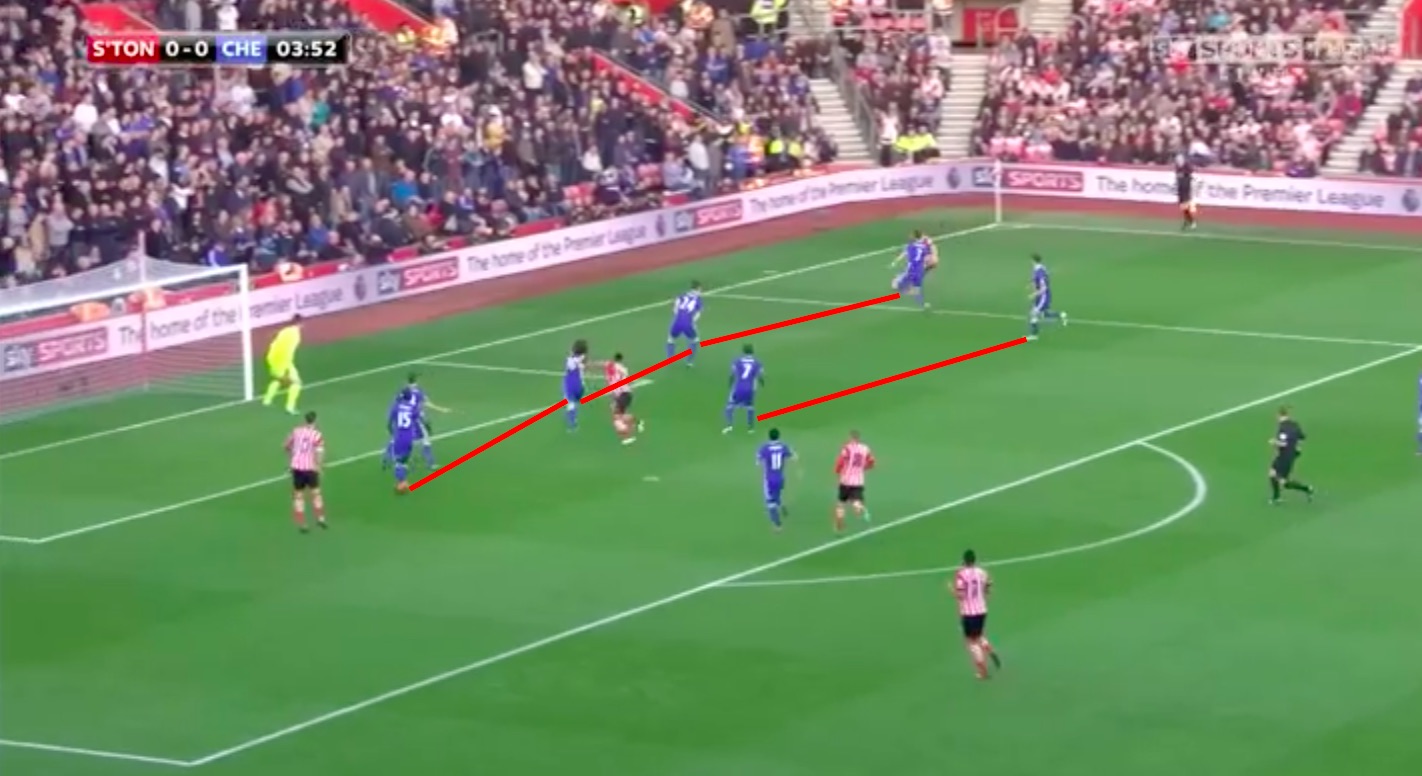 The next shot shows play when it’s progressed and Southampton are attempting to work the ball into the area. Again though Chelsea have that line of five defenders with the two screens in Matic and Kante screening them meaning the away side have almost two players for every one Southampton player. There’s going to be no easy chances there. 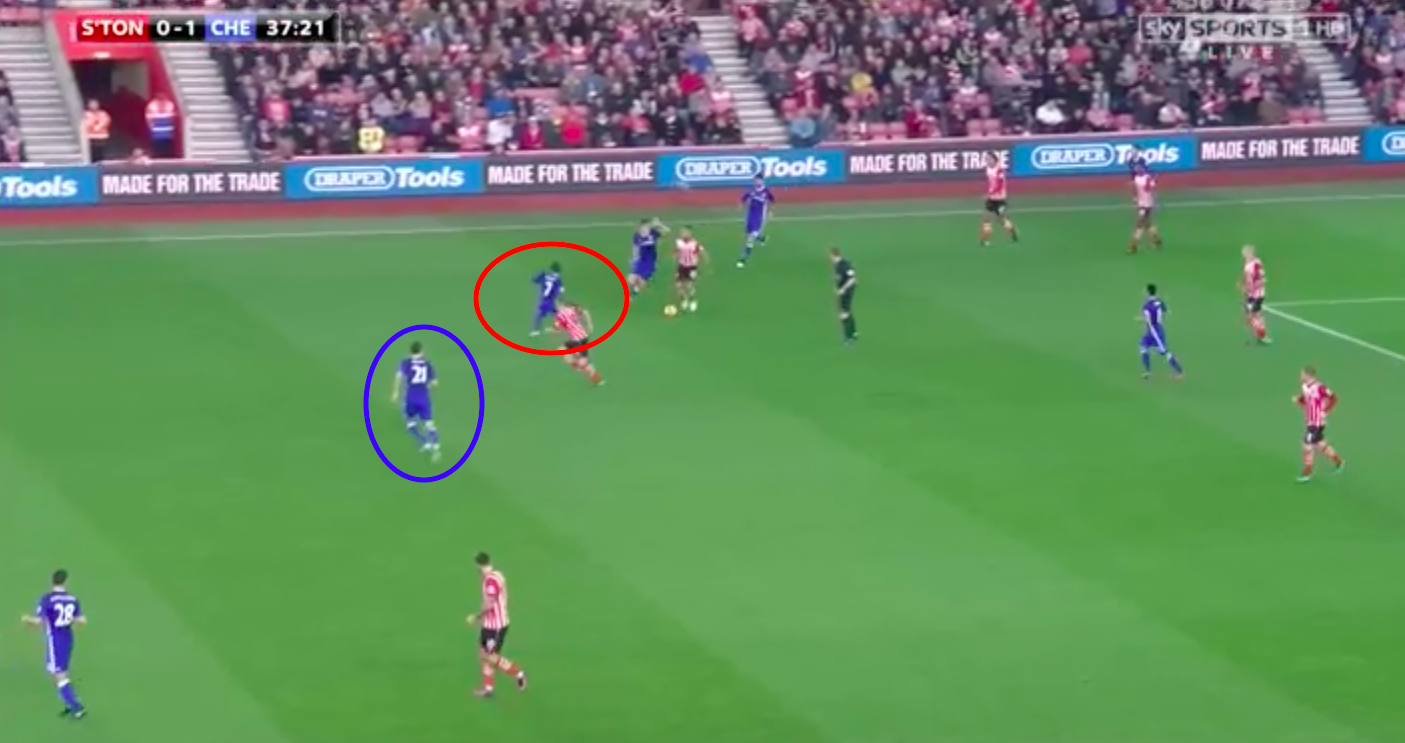 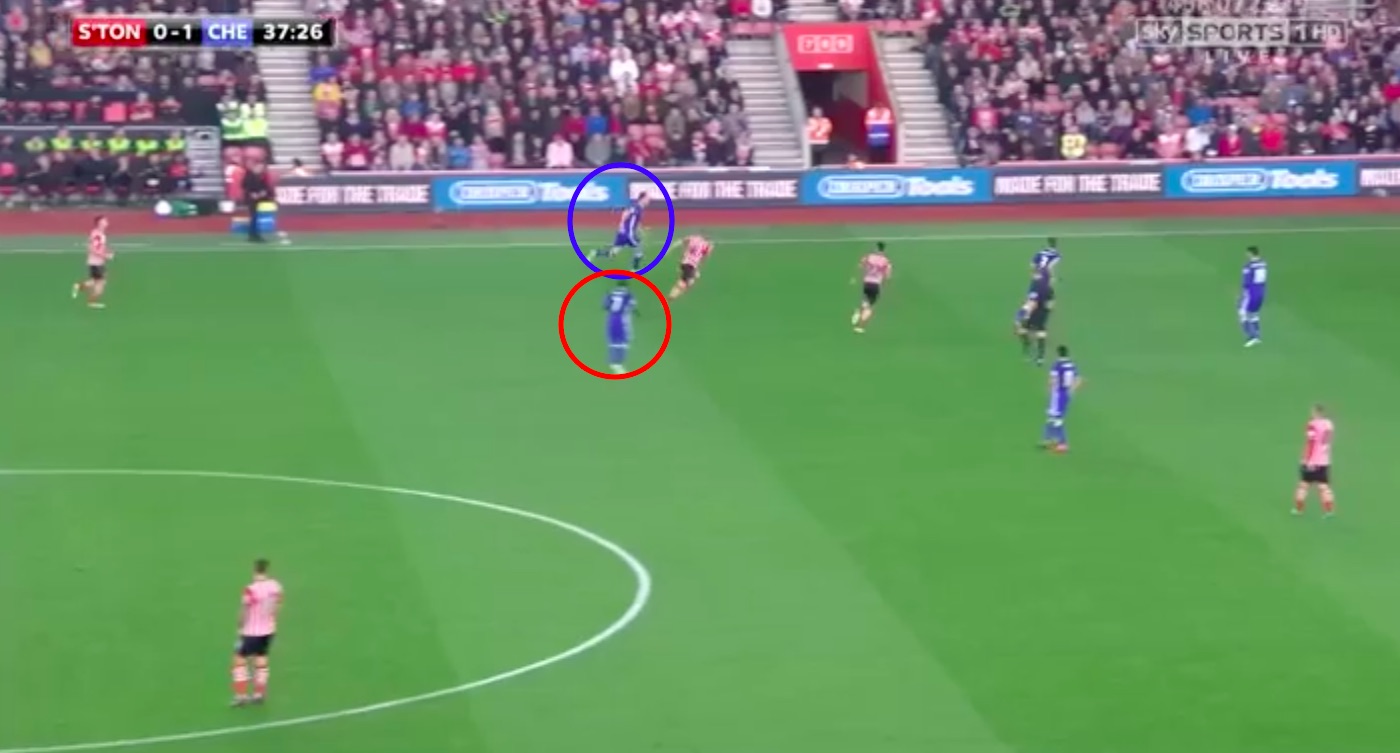 The two above pictures highlight just how well the midfield duo of Matic and Kante seems to be working. It’s like a pair are part of a rotisserie and it’s almost natural for one to cover the other. In the first picture Kante, circled in red, is advance and looking to press the opposition. Matic, circled in blue, is sweeping behind. But then in the second picture Matic has won back possession and is the furthest of the two forward. As soon as Matic regains the ball Kante is looking to fill in and plug the space centrally. 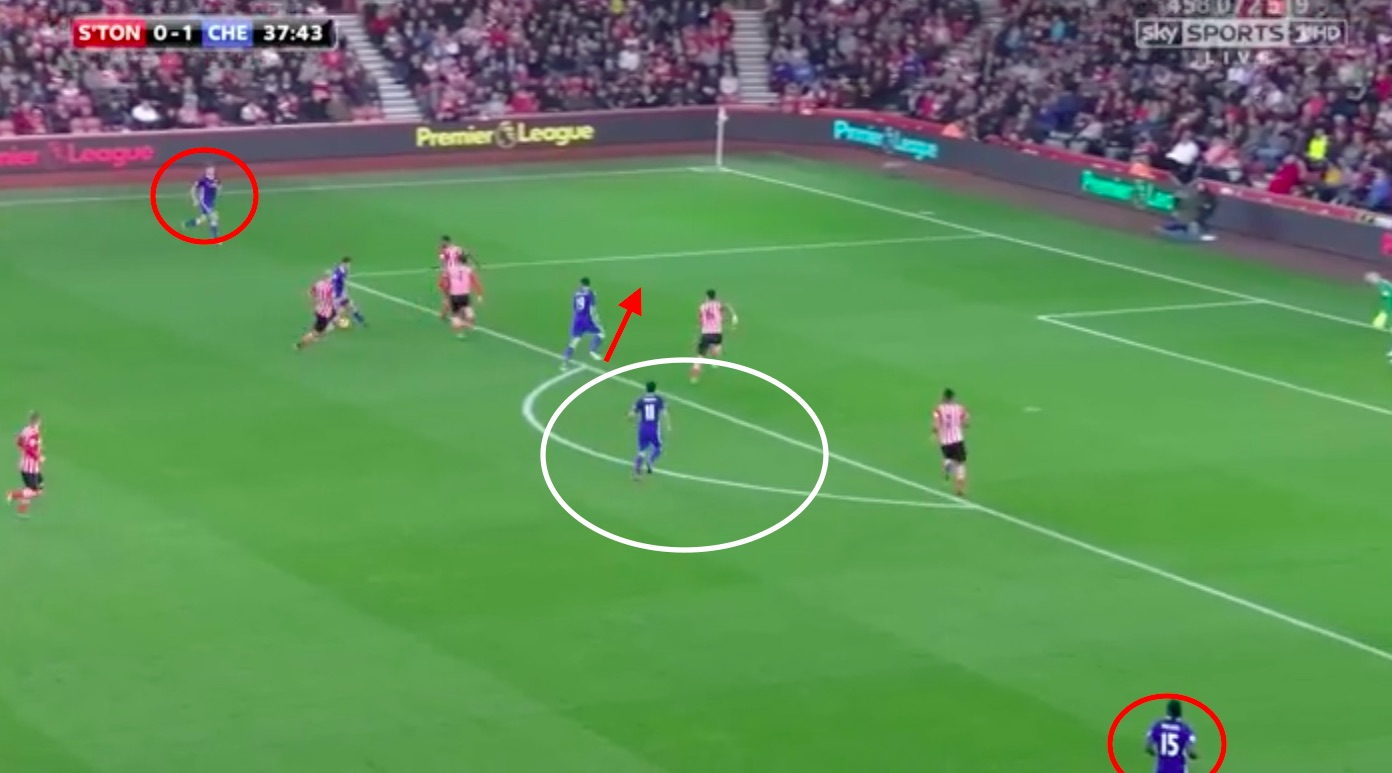 The change in formation isn’t just aiding the defence, it’s also had an impact on Chelsea in an attacking sense.

In the picture above Eden Hazard is in possession of the ball with Diego Costa and Pedro in line or ahead of him. Victor Moses and Marcos Alonso, the wing-backs who are both circled in red, are in acres of space as the Southampton defence and midfield look to stop the narrow Chelsea attacking trio but because the movement is so fluid Soton are stretched despite having numbers back.

As play progresses Hazard shimmies past Southampton players and gets a shot in at goal which works Forster. However, had the Belgian been a little more selfless Pedro was in a lot of space on the edge of the area after Diego Costa’s run took Van Dijk away from goal and Moses had the entire right hand side free.

Nothing has drastically changed. Chelsea weren’t ceding control of games before the change to 352 they averaged 552 passes per 90 minutes with an 85% pass success rate. After the change to 352 Chelsea averaged 514 passes per 90 with an 85% pass success rate. It’s on average 40 passes fewer per 90 but could that not be because Chelsea aren;t having to play as many passes to create chances now that there are more players supporting the attack? It’s easier to create overloads and triangles with more men forward.

Antonio Conte deserves a lot of credit for turning it around at Chelsea. He’s given them added security defensively and sturdy foundations to go alongside having players like Hazard and Pedro get even closer to Diego Costa so the team has more of a goal threat.