Just the mentioning the name “Thiago” these days brings images of some wonderful footballers. Paris Saint-Germain have Thiago Silva and Thiago Motta, the former perhaps one of the best central defenders of his generation. Thiago at Bayern Munich, if he can stay fit, has the potential to become a wonderful playmaker.

If reports from Italy and the English press are to be believed, Manchester United, Chelsea and even Arsenal in the past, have been linked with a move to the new Thiago, Santos defensive midfielder, Thiago Maia.

PSG are also set to be heavily interested, looking to the 19-year-old midfielder to replace Motta in the Parisian squad. Under contract until 2019, although the English clubs have yet to make a formal bid, a move for around £17-20 million will be needed to convince the Brazileirão side to sell their prize asset.

It had seemed that he was happy playing his club football in his homeland, until this summer when he helped Brazil win the Olympic Gold Medal in Rio. Playing with the likes of Neymar and PSG’s Marquinhos helped convince the youngster that he was good enough for the next step. “A lot of players say they want to play for Real Madrid or Barcelona but I identify myself with PSG,” Maia told press during this summer’s tournament. “Contact? Not yet but I hope it happens one day. “As I said, I identify myself with PSG and I have friends there. Marquinhos has told me what the club is like. It is clear he is happy there. “If I go there one day, I will be very happy. I am leaving my future in the hands of my mother and my manager though.” Maia’s life changed at the Olympics, but rather than being the pinnacle, it looks like it’s only the beginning. The midfielder is the first athlete from the region of Roraima – not just football – to represent Brazil at the games. It’s an area better known for the amazon than it’s sporting heroes, but perhaps Maia is on the verge of changing all that.

Massive night for #BRA – and their player of the tournament so far Thiago Maia is suspended. #Olympics — Rupert Fryer (@Rupert_Fryer) 10 August 2016

“There is a chance this boy will do well because he is a promising boy, who will surely have a very high development,” said Santos coach Dorival. “He will be a top player in our country’s football. But he still needs a longer period of stability, and it will only be achieved if he has consistency.”

On the field, Maia has a poise about him, he carries himself similar to that of PSG’s Motta, but before he lost his legs. Often compared to Argentina legend, Fernando Redondo, the left-foot midfielder, although playing mostly deep, has so many different elements to his game.

Maia is quick to read the game, covering back into any space that has been left. Although he reads Santos in tackles made, at 3.1 per game, he is 1.2 behind Corinthians defensive midfielder, Bruno Henrique, who leads the league. Maia scrapes into the top 20 in the division and seventh in players in a similar position.

His numbers reflect his style of play. Against Vitoria, in the recent 3-2 win, he displayed his tracking, recovery speed, strength and desire not to be beaten, all in one defensive action. 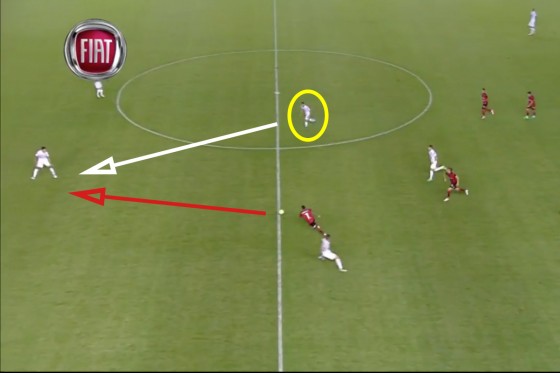 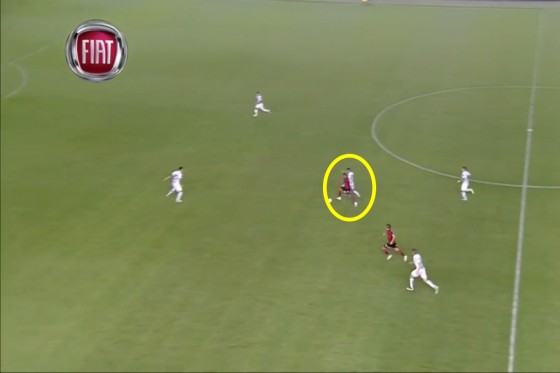 Maia, circled in yellow, reacted well as the away side tried to break through the middle. He made up the initial ground to challenge Marinho, but the forward fought off the first challenge, creating some space between he and the chasing midfielder. However, again, not giving up, Maia got in front of the speedy attacker, getting his foot, although in an unorthodox fashion in front of the ball. Eventually clearing the danger. 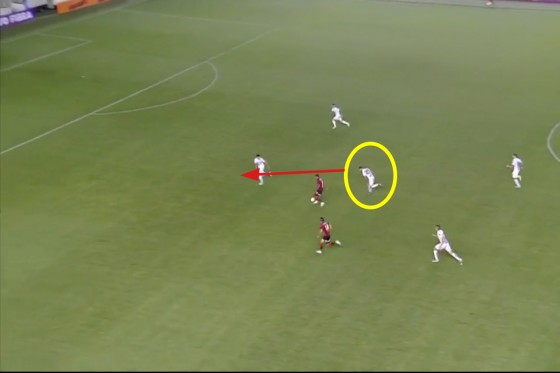 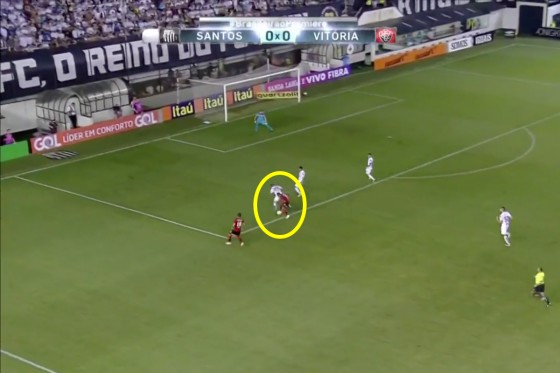 Maia is always trying to stay on his feet to steal the ball, keeping on his feet and not diving in. He has the body-strength to fight off anyone, and then he has the calmness and serenity in his game to move the ball on, get the attack going.

Rejected by Corinthians as a youth player, he came through the ranks at Santos and you can see why any coach would like him. He keeps the game simple, and for a club like Chelsea or PSG, his short, smart passes are exactly how both clubs play the game.

You would like him to try and use his right foot, especially when in trouble, but he is good enough on his left to cover any short-fallings.

Unlike Motta and Redondo back in his prime, Maia isn’t just a standard midfield anchor, every so often he’ll push on and try to create chances further up the pitch. The 19-year-old will pop up on the left, or cutting through the middle, exhibiting his ability to find gaps and exploit the opposition. 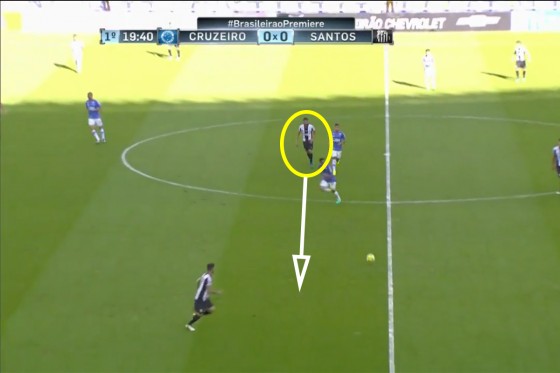 Against Cruzeiro, although they eventually drew 2-1, Maia showed his attacking instincts early in the first half. It began innocently, heading the ball out to the left wing. Then, with his marker unaware, he burst forward in the blink of an eye, charging down the left channel and winning a corner. 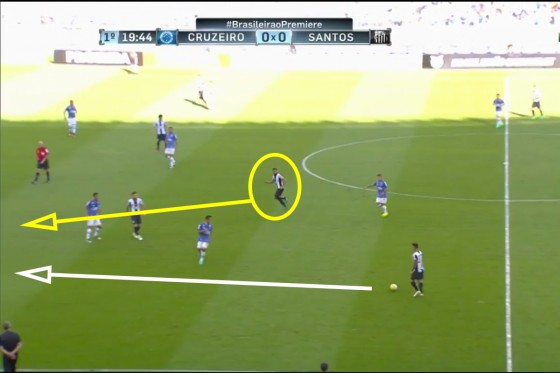 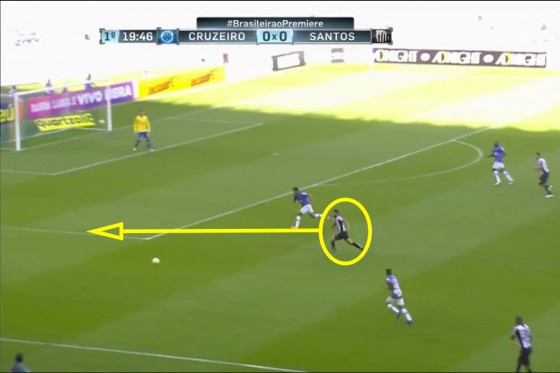 Maia doesn’t look the fastest during normal passages of play, but either when pushing into the final third or covering on defence, he has the speed to catch up to the danger.

Watching him play, it’s easy to forget that he’s just 19 years old. No other teenager in Brazil sees as much of the ball per game than Maia. He also completes 86.3% of his passes, more than any other player his age. A superb young talent, someone who is going to go far during his career. Europe is the next logical step and his game looks complimentary to each of the three teams linked to be most interested. He has faced adversity in each stage of his young life to get this far, so don’t expect him to fail when he makes the jump across the Atlantic.

We all think we know more about football than our mates. But trying to predict the outcome of matches is a lottery. Now there’s a...

Video Assistant Referees – How Will They Work?

It seems strange to think of one of the world’s top referees watching a match on TV and raging at a controversial decision like the...

Football Whispers are delighted to announce that we have been nominated in two categories at the 2017 Sports Technology Awards: ‘Outstanding Start-up’ and ‘Best Technology...

Anderson Talisca is reportedly once again on Jurgen Klopp’s radar after Liverpool sent scouts to cast an eye over him in a recent Europa League...

Why Chelsea Should Stop Waiting And Buy Fernando Llorente

One January, several seasons ago, Chelsea bought a striker that many people – including his new manager – thought was an extravagance. He’d scored a...

Battling On: Story Of Shakhtar Donetsk Throughout The War

Legendary Liverpool manager Bill Shankly once famously uttered that football is much, much more important than life and death. But while millions of us follow...

Liverpool. The only team in the land that could just as easily shut out Manchester City as concede three goals to a sinking Swansea in...

Dimitri Payet has gleefully burned the bridges between him and West Ham United as he seeks to hot-foot it back to France with Marseille. Despite...

For many it has become something of a footballing JFK moment: “Where were you when you heard that Eric Cantona had signed for Manchester United?”...