John Stones’ £50 million move from Everton to Manchester City rightly dominated the headlines this past summer. Here was a raw 22-year-old centre-back with a variety of strengths that aligned with what Pep Guardiola not only expects from his centre-backs, he demands it. The most exciting part of the move, for a neutral at least, was the prospect of what Pep could turn Stones into if he was able to harness his ability much like how he did with Jerome Boateng when at Bayern Munich.

Cynics in the British media panned the move believing £50 million for a centre-back with fewer than 80 Premier League matches to his name was all that was wrong with modern day football. As far as they were concerned he was the antithesis of an English centre-back and a plague to their “hoof first and ask questions later” ideology.

It would be an understatement to say that Stones had a lot going against him before he had even kicked a ball for Manchester City. His style wasn’t welcomed in the Premier League and the fee City paid just made him a prime target for criticism. Like sharks circling their prey, the British media just sat and waited for a John Stones error. And eventually, to some extent at least, their patience paid off.

In Manchester City’s 1-1 draw at home to Southampton in October the young centre-back was blamed for Southampton’s opener. A mix-up between Stones and Kompany leads to Nathan Redmond nipping in before the ball reaches ‘keeper Claudio Bravo before rolling the ball into an empty net. As Stones goes to play the ball back to Kompany the big Belgian defender steps up thinking Stones is passing back to Bravo.

Sky pundits Theirry Henry and Jamie Carragher wasted no time laying the blame squarely at the feet of Stones with Henry saying Stones should open up his body and look for the advanced full-back to play past the Southampton press completely. Jamie Carragher believes Stones should be playing the ball back to Bravo in this instance and had this to say

“Even if he gives the ball to Vincent Kompany, he would be in trouble. He’s stepping forward to say to John Stones, give that to the goalkeeper. [Stones] thinks Kompany is there, he looks away. It’s John Stones, it’s a really poor mistake. Just use your Goalkeeper.” 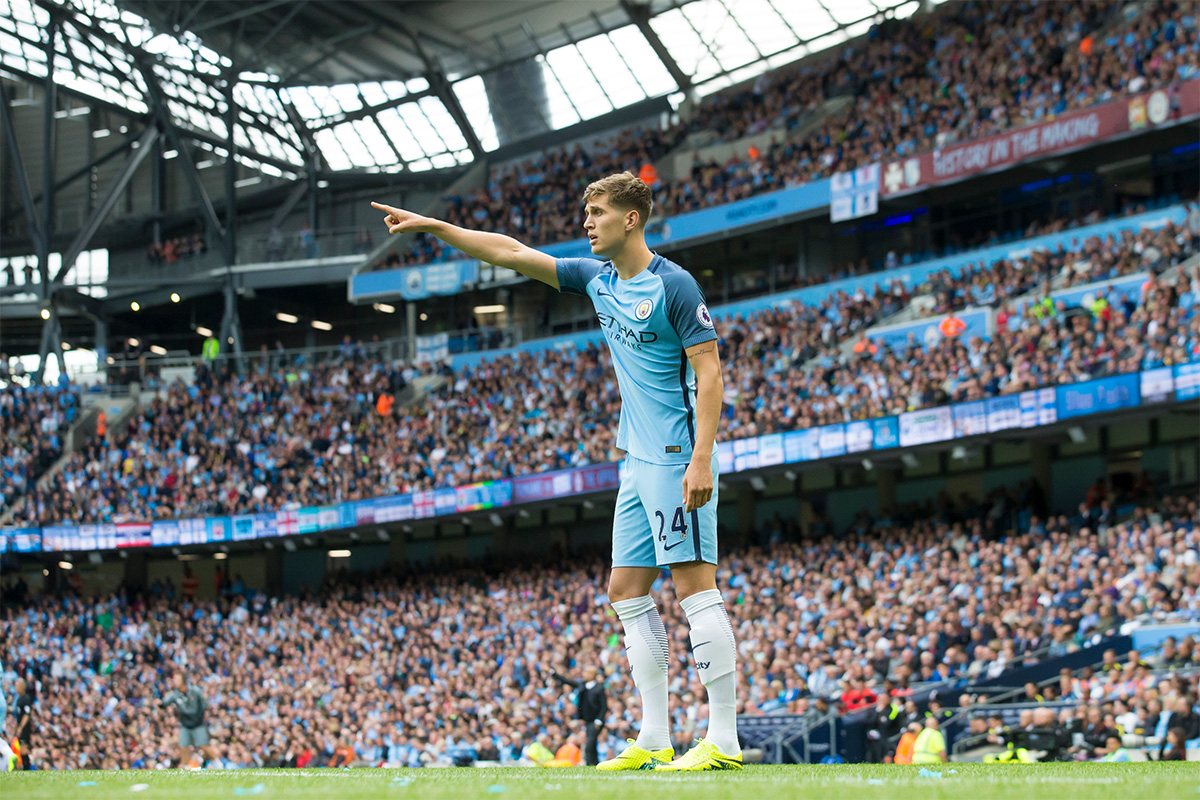 The centre-back receives the ball off of Fernandinho and straight away his options are limited due to the fact Southampton are pressing high up the pitch and committing men forward to it. Often teams will press as almost like a token gesture but Southampton are aggressive and are almost playing man for man. There’s no easy pass for Stones. He could play the ball back to Fernandinho but Oriol Romeu is close by and is tenacious in the tackle. Playing that pass is risky and if Southampton win possession back Redmond is one vs one against Kompany with a lot of room to run into.

Thierry Henry mentions Stones should look for the advanced full-back but when receiving the ball Stones’ body shape doesn’t allow such a pass and the Southampton man advancing on him means he’s not got the time to readjust which basically kills that passing lane off. However, Kompany is in the ideal position to play a first-time pass to the advanced full-back. Kompany may have had Redmond in his proximity but there’s little to no chance the Southampton man can react in time to stop such a pass and Man City would bypass the four Southampton players in their defensive third. They would’ve been taken out of the game completely.

It was an error that was blown out of proportion all because it was John Stones who made it and his ‘needless’ passing out from the back is a risk. Even if it is what his manager wants, the same man who has won over 20 honours as a manager playing the football he’s trying to replicate at Manchester City now. He has a long-term plan and he know what pieces he needs for that plan to come to fruition.

Stones hasn’t been at Manchester City for very long but from looking at his stats there is already an evolution to his game. He’s winning more of his aerial duels but that’s dependant on the opposition attempting long balls. What’s really interesting is the fact he’s reduced his long balls per 90 minutes from 4.4 to just 1.8 and he’s now attempting almost 10 more passes per 90 minutes but his average pass success rate is higher than it was when he was attempting fewer passes.

In Man City’s 4-0 win over WBA Stones attempted 72 passes with a 97.2% pass success rate. Some may claim it’s easy to boost the successful passes stat with simple 5 yard passes but Stones has a lot more to his game than that.

Stones can be aggressive and doesn’t just opt for the simple 5 yard pass to boost those stats of his. In the first picture there is clearly a pass on to Fernandinho but instead of this Stones opts to carry the ball forward himself. WBA fail to close him down quickly enough and after advancing 30 yards he threads a pass through to Aguero, in the second picture, and City have managed to turn defence into attack in a matter of moments because of Stones’ ability on the ball.

He’s already settled in well with the Man City philosophy and he’s embraced what Pep is trying to teach. In 10 years down the line the Stones transfer may look to be a clever signing.

Keep up to date with Manchester City transfer rumours.