Scotland haven’t qualified for a major international tournament since the 1998 World Cup, but could the future look brighter for Scottish football in the form of some exciting young players? Here, Football Whispers takes a look at eight of the best up-and-coming talents…

Since breaking into the Nottingham Forest first team in the 2015/16 season, Oliver Burke has enjoyed a rapid rise to prominence. The winger quickly established himself as one of the finest young players in the Championship, reportedly attracting glances from some of the Premier League’s best sides. However, on 28 August, rather than move up a division he moved to an entirely different country, signing for Red Bull Leipzig in Germany. 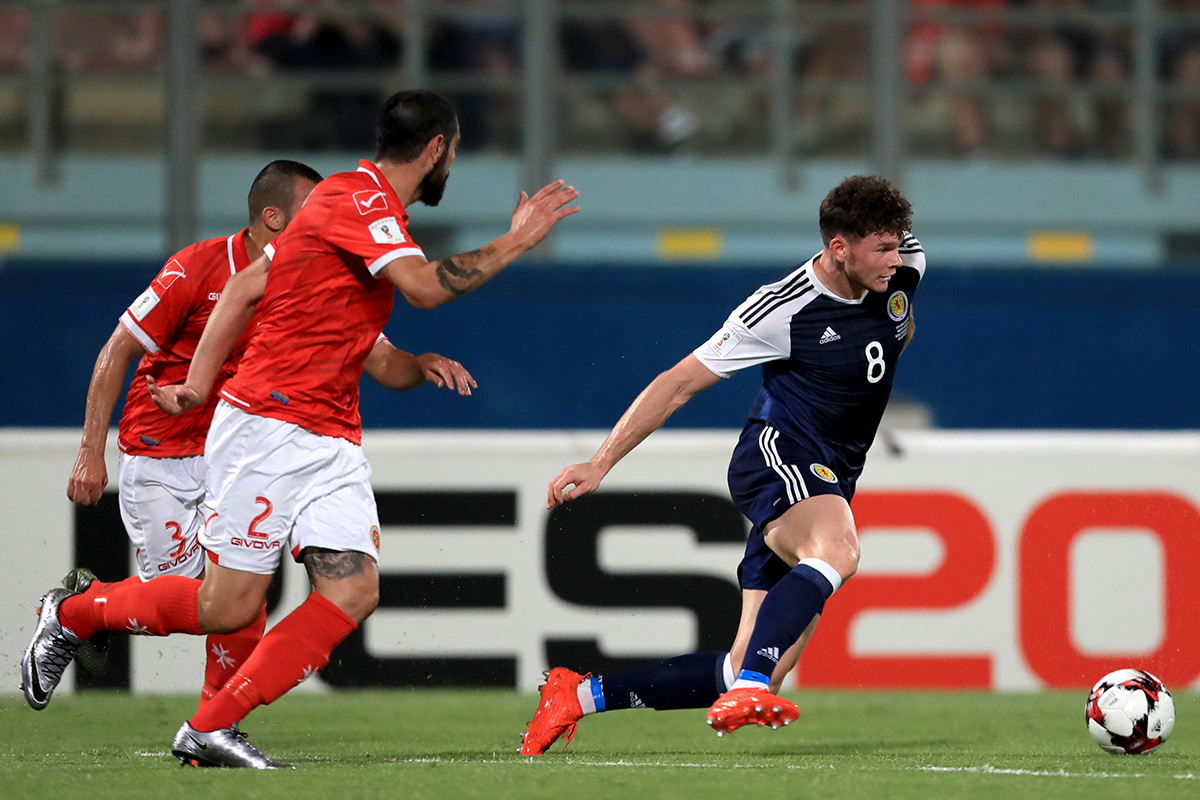 The £13 million transfer fee paid by the newly-promoted Bundesliga outfit to secure Burke’s signature made him the most expensive Scottish player of all time – and there are plenty of reasons for that. Standing at a sturdy 6’ 2”, the teenager wouldn’t look out of place at centre-back, but he has the pace and raw audacity of a potentially exceptional attacker.

Versatile enough to play anywhere across the frontline – and within the tactically innovative confines of the German top tier – he should learn plenty from playing against the likes of Bayern Munich, Borussia Dortmund and Bayer Leverkusen over the course of his five-year deal in the Bundesliga. Click here to read more about the rise of Oliver Burke.

While Jason Cummings tends to divide opinion in Scotland, it is impossible to question his goalscoring record. At a young age he was released by Hearts only to be snapped up by their Edinburgh rivals Hibernian, and he hasn’t stopped putting the ball in the net since.

In his first full campaign of competitive action he scored 21 goals in 42 appearances for the Scottish Championship side. That was followed up by 25 in 49 last term. And, so far this season, he has hit seven in eight outings.

Bodacious and nonchalant, he is capable of the spectacular, both good and bad. But, as a sound finisher with good movement and speed, don’t be surprised to see him called into the full Scotland squad in the near future.

Ryan Gauld is still only 20 years of age, an incredible fact considering all that he has packed into his career thus far. After a superb 2013/14 season with Dundee United that saw him score eight goals in 38 appearances – and dubbed ‘Baby Messi’ by sections of the Scottish press for his nimble footwork, refined technical ability, dribbling style and composed left foot – he was signed by Portuguese giants Sporting for a fee in the region of £3 million. 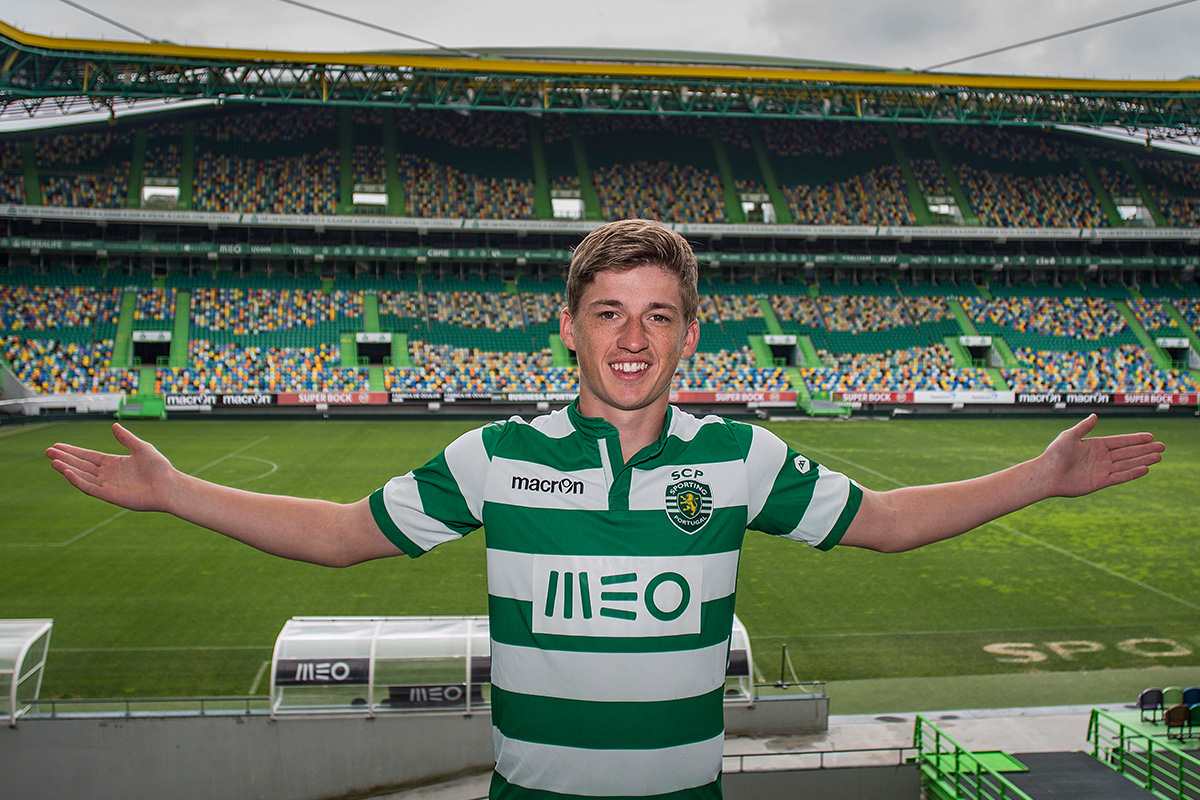 The move to Lisbon was believed to be the right one at the time, as he was joining a club with a reputation for nurturing young talent, but he has yet to truly kick on since at the Primeira Liga giants.

After two years or regular football with Sporting’s ‘B’ team in the Portuguese second division, he was loaned out to Vitoria Setubal over the summer with the intention of getting regular experience in the top tier. But, while his club career remains promising, he is yet to have been called up to the Scottish national team. Fortunately, time is still on his side and, for a talent as big as this, Scottish fans are more than happy to be patient.

A diligent midfield technician capable of playing wide or centrally, John McGinn doesn’t always stand out. However, he is capable of taking control of games, driving forward and offers a genuine threat from range with his left foot.

An intelligent passer, McGinn he has been integral for Hibernian since swapping St Mirren for Easter Road before the start of the 2015/16 campaign. A full cap for Scotland followed – in March’s 1-0 friendly win over Denmark at Hampden Park – and the 21-year-old was also called up by Gordon Strachan for the pre-Euro 2016 warm-up against France and recent World Cup Qualifier in Malta. Expect more to follow for the Hibs man.

Barry McKay announced himself to the Scottish football in the most emphatic way possible: with an outstanding long-range strike in an Old Firm derby. His wonder strike against Celtic in last season’s Scottish Cup semi-final put Rangers 2-1 up in a match they would ultimately win on penalties – where McKay found the net again with his spot-kick – and book a return to Hampden Park for the final against Hibernian.

The lithe, tricky winger would play the full 90 minutes of the 3-2 final defeat to Hibernian, but his bravery on the ball and willingness to run at defenders certainly won him many new fans.

His sole Scotland cap came in June as a late substitute against France in Metz, and the youngster is currently enjoying his first taste of Scottish Premiership football as a Gers’ first-teamer after loan spells at Morton and Raith Rovers in recent seasons.

Andrew Robertson’s story is one dreams are made of. After impressing in the Scottish Third Division with Queen’s Park he was snapped up by Dundee United in June 2013. Following a stunning debut campaign in the Scottish top flight, English Premier League side Hull City came calling with a £2.85 million bid for the young left-back. 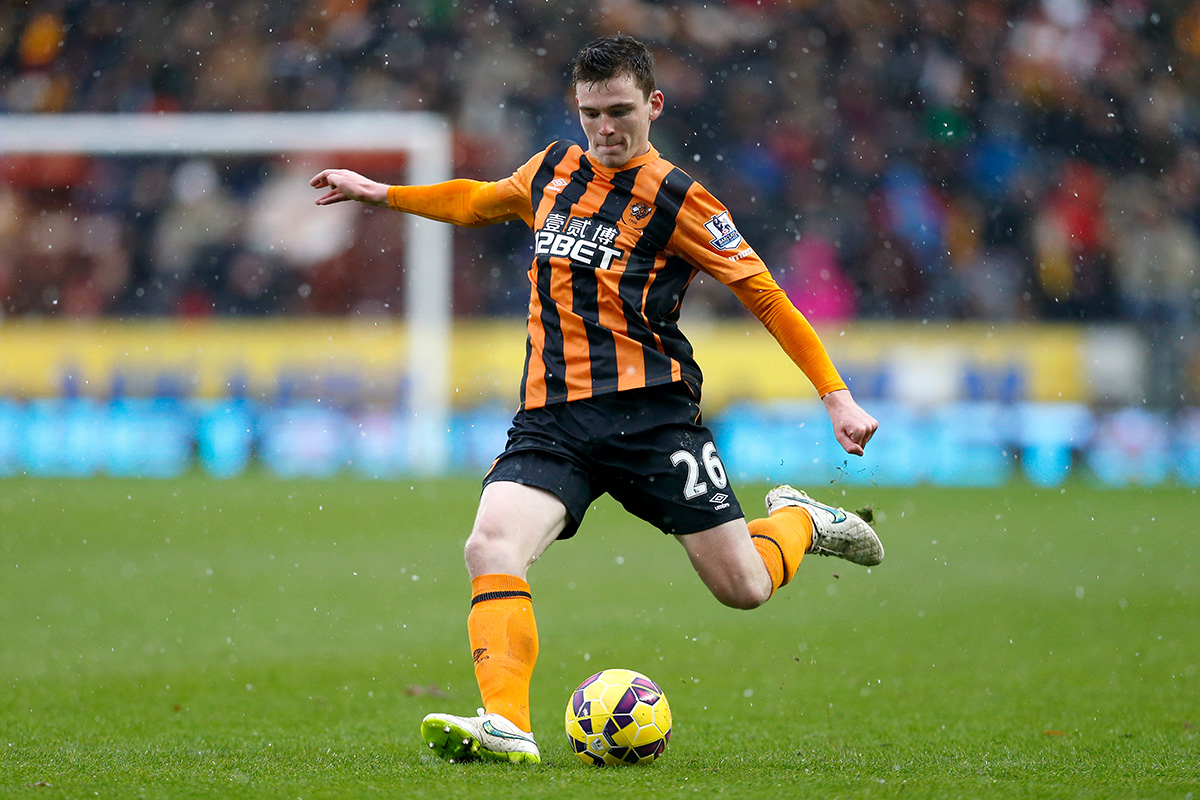 Highly mobile, an aggressive runner and a tantalising crosser of the ball, Robertson is a truly modern full-back. He works well up and down the left flank, providing genuine cutting edge in attack, and has settled surprisingly quickly to the rigours of Premier League football. He was the subject of a reported £7 million bid from West Ham United over the summer but has stayed at the KCOM and featured in all six of the Tigers’ league and cup games so far this season.

This campaign represents John Souttar’s fifth in the Scottish top tier, which is incredible considering he is still only 19 years of age. After breaking out at Dundee United – as many others on this list have done – his career wavered slightly before joining Hearts in February of this year. 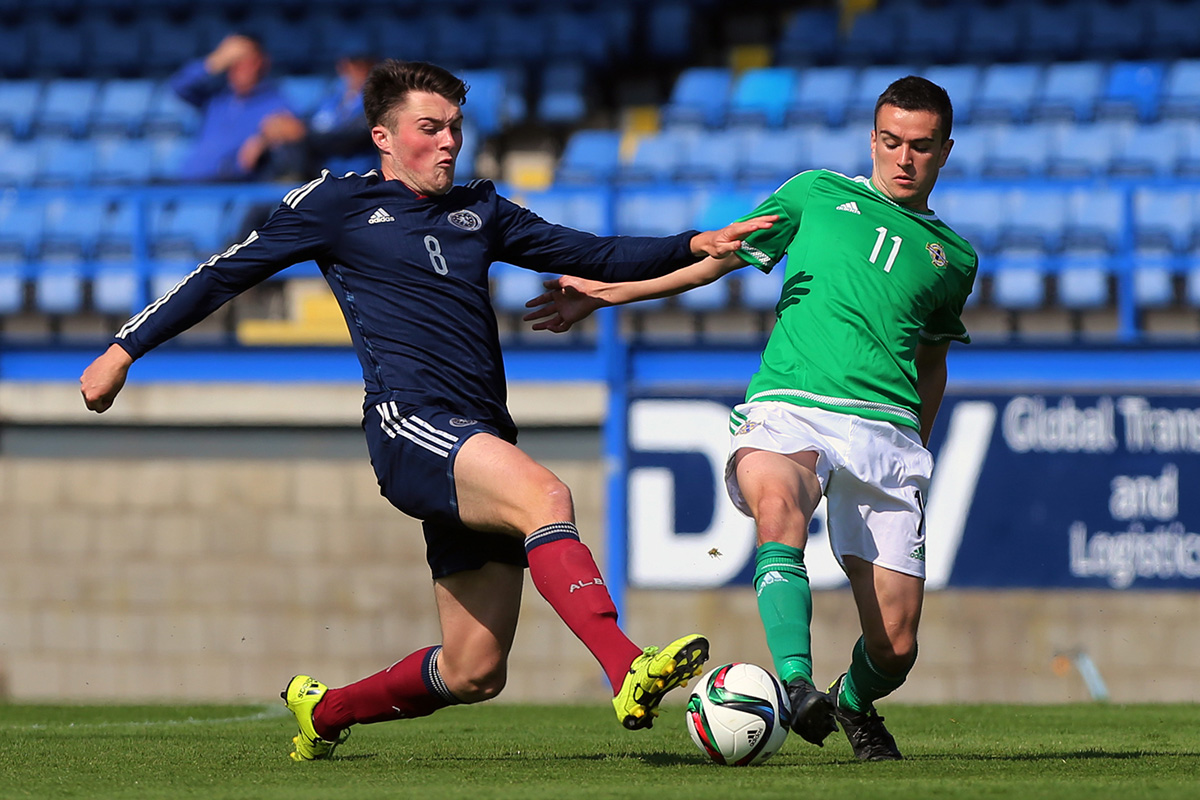 Now settled at the Edinburgh club, and established in coach Robbie Neilson’s starting XI first choice centre-back – having played in defensive midfield and at right-back – the youngster has played all six of Hearts’ opening Premiership fixtures.

Fast, attack-minded and confident on the ball, Kieran Tierney is rarely troubled by the presence of an opposition marker. He is a forward-thinking left-back who enjoys making overlapping or underlapping runs, running at opposing defenders and whipping balls into the box. 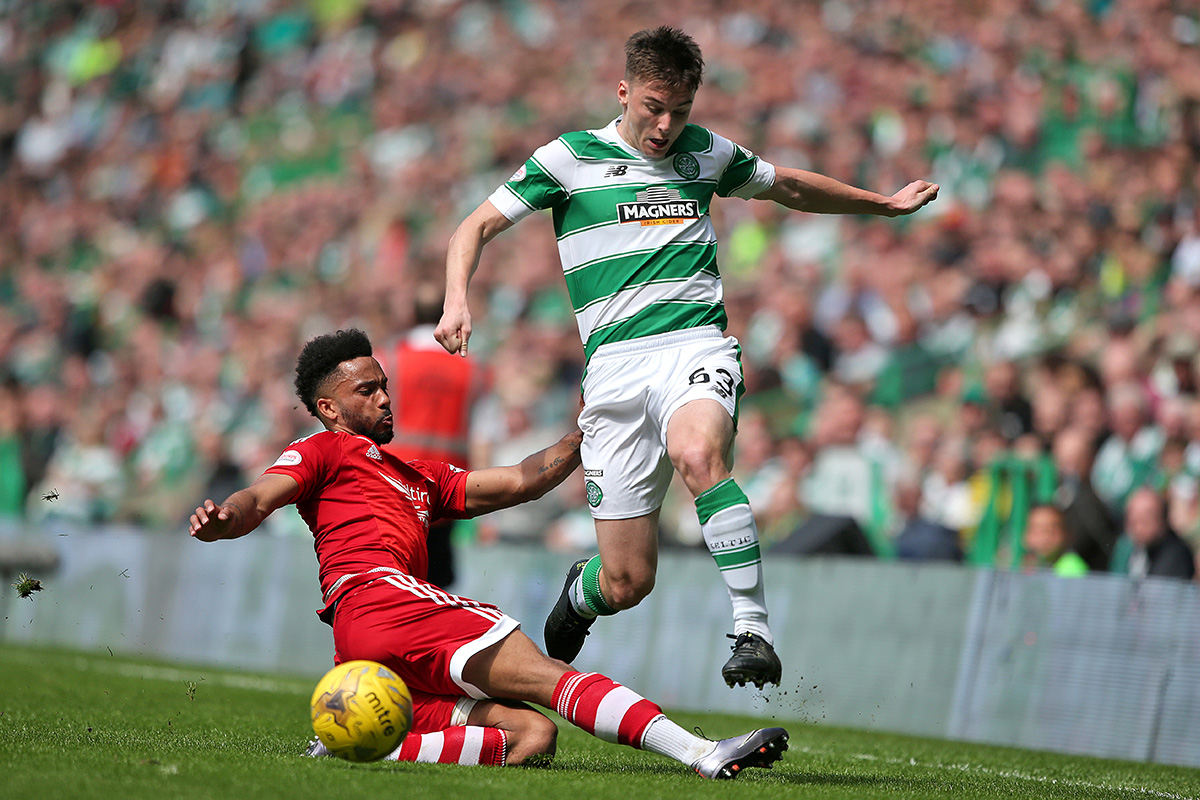 He became a regular first-team member with Celtic last season and to date has played 47 times and scored once for the Hoops – and laid on the assist for Stuart Armstrong for the fifth goal in the recent 5-1 derby day thrashing of Rangers at Celtic Park. Tierney looks set to compete with Andrew Robertson for Scotland’s left-back berth in the years to come.