Tottenham Hotspur have a rich history of achievement – being the first British team ever to win a European competition – and have long-since held dear an inbuilt desire to play expressive, attacking football.

White Hart Lane has also been home to myriad entertaining and gifted footballers over the years. Most recently, the likes of Dimitar Berbatov and Gareth Bale have lit up North London and we have witnessed the rise of Harry Kane.

And going a little further back in time, David Ginola, Teddy Sheringham and Ledley King are still revered among Spurs supporters. But who should be considered Tottenham’s greatest ever players? Here’s our best guess at the top five. 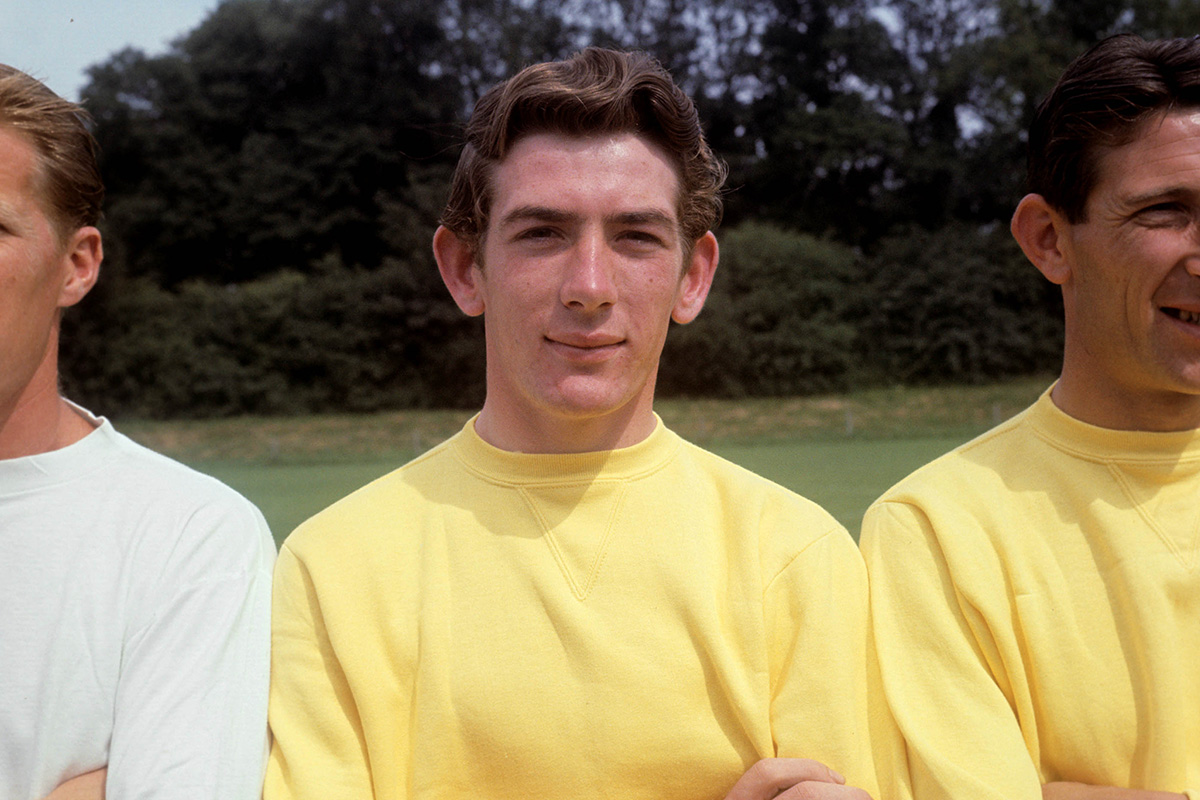 Pat Jennings is a rare footballer in many senses: a goalkeeper equally adept at making saves with his legs and hands, one of only two keepers to be named PFA Player of the Year, and a player who has crossed the North London Tottenham-Arsenal divide yet remains in the affections of both sets of supporters.

Spurs signed Jennings from Watford in 1964, and, over his 13 years at White Hart Lane, the Northern Irishman marked himself out as one of the very best goalkeepers on the planet.

Jennings’ phenomenal shot-stopping ability was a crucial part of one of the most successful eras of Tottenham’s history, as they won the 1967 FA Cup, the 1971 and ’73 League Cup as well as the UEFA Cup in 1972.

And Jennings’ skills were recognised beyond the terraces of White Hart Lane, as he was the Football Writers Association Footballer of the Year in 1973, and in ’76, his fellow professionals anointed him the best player in the country when he won the ballot for the PFA Player of the Year award.

After Spurs were relegated from the First Division in 1977, Jennings was sold to Arsenal by then-manager Keith Burkinshaw. But, unlike when Sol Campbell joined the Gunners in the transfer that still divides North London, Spurs fans didn’t hold a grudge against Jennings for joining the enemy, as they knew he’d have stayed if given the choice. 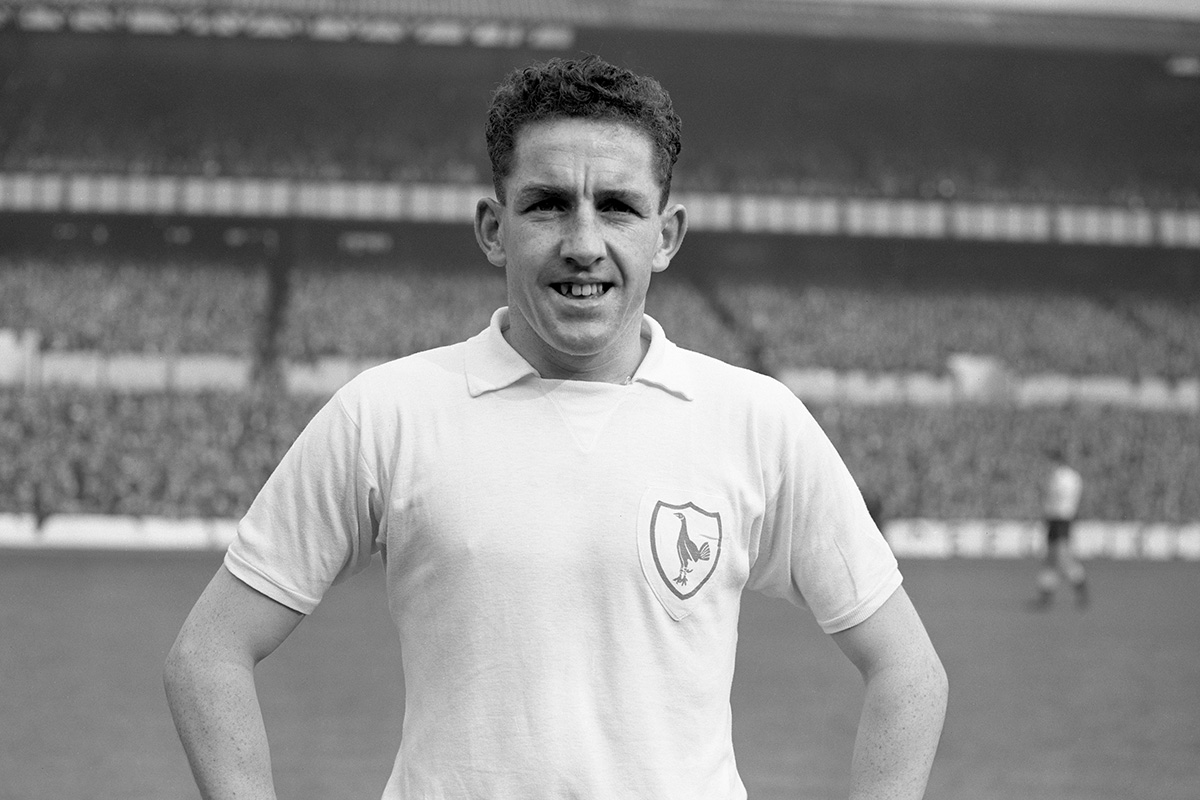 Scottish midfielder Dave Mackay joined Spurs from Heart of Midlothian in 1959, and the tough-tackling enforcer would go on to be the driving force behind Tottenham’s ground-breaking side of the early-1960s.

Mackay earned himself the reputation of being one of the British games hard men while at Spurs, perhaps largely due to the iconic image of him grabbing hold of fellow Scottish tough-man Billy Bremner – the incident left onlookers in no doubt as to which of the two men should be considered the alpha male.

But aside from his domineering presence, Mackay was a superb midfielder whose grit and will to win cannot be underestimated as one of the key factors in Tottenham’s success during his prime. More than a mere defensive midfielder, Mackay’s ability to power forward from the centre of the field was a vital cog in the attacking Spurs side he would go on to captain.

In his nine years and over 260 appearances for Tottenham, Mackay won the First Division in 1961, three FA Cups and the UEFA Cup Winners’ Cup in 1963. 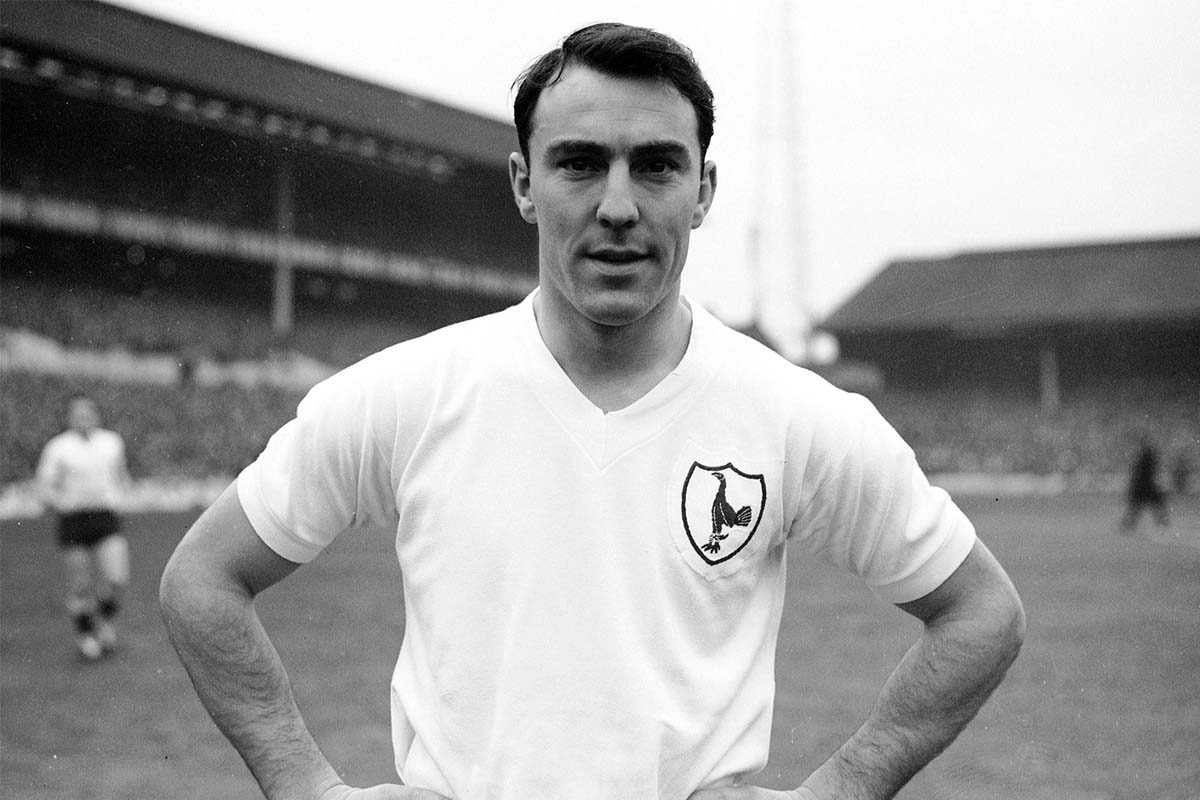 It’s not too much of a stretch to make the argument that legendary England striker Jimmy Greaves is the greatest pure goal scorer to ever lace up a pair of football boots. With his devastating finishing ability, pace over short distances and unquenchable thirst to put the ball in the net, Greaves is regarded as one of the finest centre-forwards of his generation; and Spurs were lucky enough to have him for nine of his prime years.

Signed from AC Milan in 1961, Greaves arrived in London looking to put an unhappy spell in Italy behind him. The Englishman failed to settle in Milan and didn’t get along with manager Nereo Rocco; he still managed an impressive strike rate with nine goals from just 12 appearances with the Rossoneri, though.

Eager to get his career back on track, Greaves hit the ground running at White Hart Lane, scoring 30 goals in 31 games during his first season, including nine goals in Spurs’ successful 1962 FA Cup campaign – one of which came in the final, a 3-1 defeat of Burnley. The following season, five of Greaves’ 44 goals were scored on Tottenham’s triumphant run to Cup Winners’ Cup glory.

With his 266 goals from 381 appearances, Greaves remains Tottenham’s highest ever goal scorer. To give some context to how impressive Greaves’ record is, current Spurs star Harry Kane would have to score 25 goals a season for at least eight more years in order to surpass the former Chelsea player, and, even then, Kane would still be more than 140 goals short of Greaves’ career total. 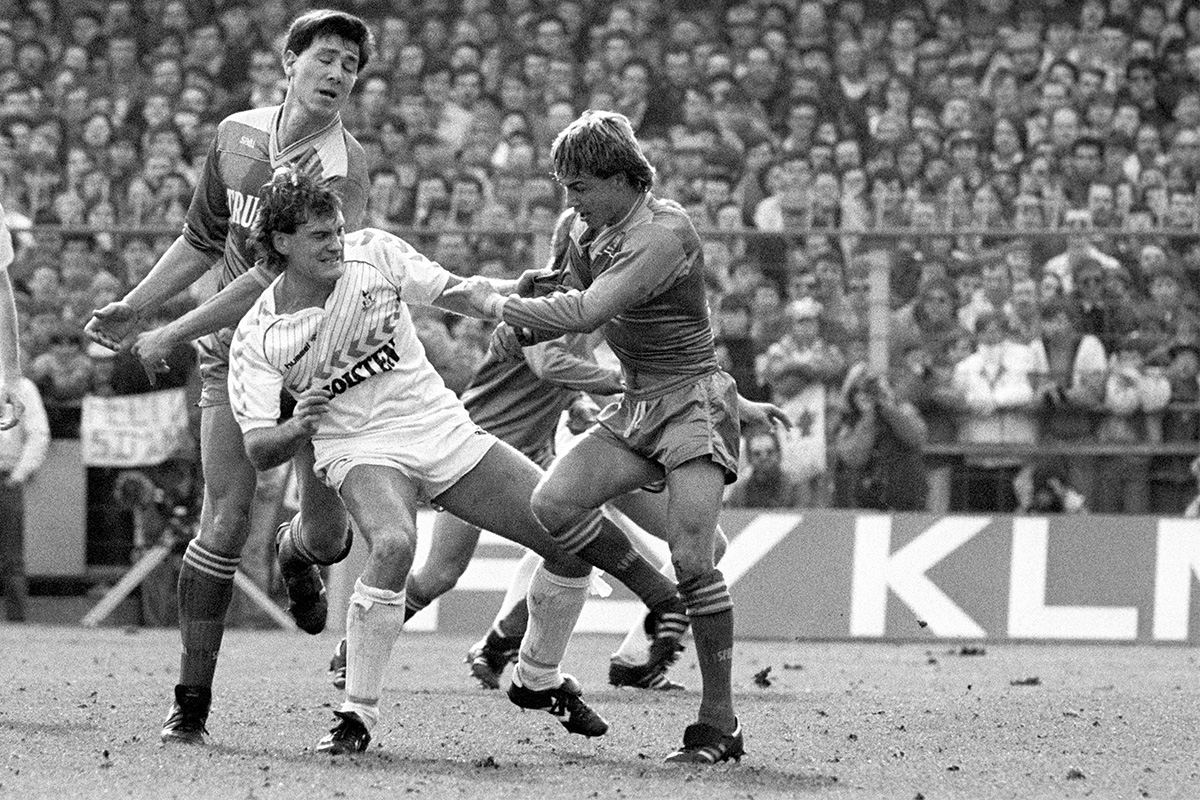 To this day, Glenn Hoddle remains Tottenham fans’ favourite son. A graduate of their own youth system, the midfield playmaker went on to play 460 games for Spurs, netting 110 goals – an impressive tally considering his position.

Hoddle became an influential player at White Hart Lane from an early age, as he helped his side bounce back up into the First Division as a 20-year-old in 1978, following their relegation the previous season.

As the midfield conductor, Hoddle was the linchpin of Spurs’ back-to-back FA Cup successes in 1981 and ’82, as well as being the chief creative force behind the North Londoners’ 1984 UEFA Cup triumph.

Hoddle was often derided as being a “luxury player” during his career, but the England international was equipped with the requisite physicality to succeed in an era much more brutal than today. His laid-back, unhurried approach may have been the reason for his being mislabelled, but one should not mistake his mellow on-field demeanour for softness.

Few English midfielders before or since have possessed Hoddle’s technical ability and grace, which makes it somewhat of a mystery as to why the Spurs legend failed to amass more than his 53 international caps.

But whether England cared to properly utilise him or not, Tottenham fans were always appreciative of just what a once-in-a-generation player they had in Hoddle; he was one of their own too. 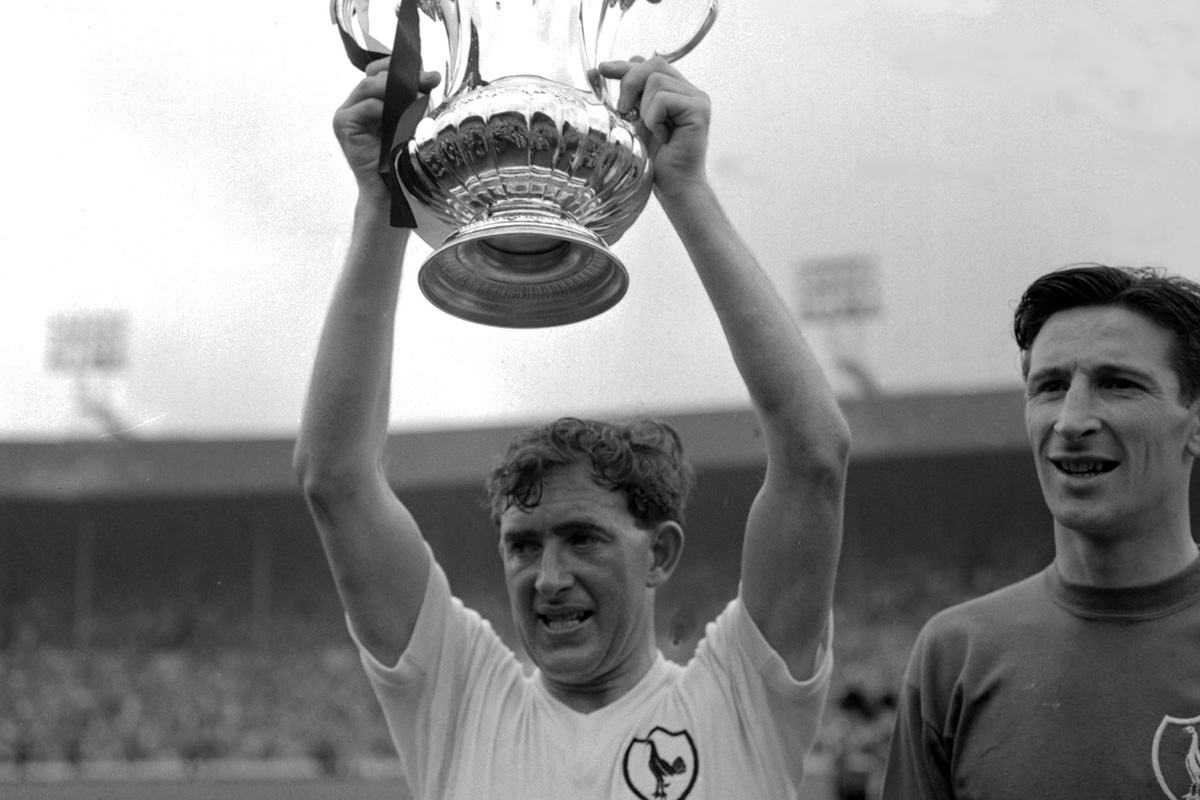 “Football is about glory, it is about doing things in style and with a flourish, about going out and beating the lot, not waiting for them to die of boredom.” A famous quote from Danny Blanchflower which perfectly summed up both his personal footballing philosophy, as well as the ethos of the great Spurs team he was a part of.

And, in truth, Blanchflower was far more than just another member of the Tottenham starting eleven: he was the attacking architect of the greatest side in the club’s history, as well as being the on-field leader and lieutenant to manager Bill Nicholson.

The Northern Irish inside-forward has the ideal blend of winning mentality and entertainer, with a will to express his skill and creativity.

The great Tottenham side of the early 1960’s was a swashbuckling, fast-paced, attacking outfit, and Blanchflower was the embodiment of all of those characteristics. Though never a prolific goal scorer, Blanchflower’s value could not be defined in pure facts and figures, his influence over a Spurs side which won the First Division in 1961, as well as two FA Cups and the 1963 Cup Winners’ Cup, cannot be underestimated.

Despite the fact that the peak of his career came more than 50 years ago, the former Aston Villa and Barnsley player is still considered to be one of the greatest ever British footballers; and nobody holds Blanchflower in higher esteem than those inside White Hart Lane.