West Ham United are in trouble. They currently sit 17th in the Premier League with just three victories from 12 games and just one point above Hull City in the relegation zone.

Hammers fans will believe they have more than the teams below them, hoping that things eventually work themselves out. Slaven Bilic’s problem is that the fixtures before the busiest time of the year don’t quite work in his favour.

Old Trafford on Sunday throws up their first test against Manchester United, they will be back there three days later for the League Cup game on Wednesday night. Then they take on Arsenal at the Olympic Stadium and Liverpool at Anfield.

With Burnley, Hull, Swansea and Leicester City to come over the festive period, it’s critical to their season that the East London team come out of the next fortnight still in the mix.

“There is not much to say, I am doing my job,” said the Croatian boss before this weekend. “I speak to the owners, mostly Mr Sullivan, regularly after every game and in between if something needs talking about. I feel supported and as I have said so many times I concentrate on my job and our next game, and that’s basically it.”

Defeat away at Spurs would have been hard to take. No team has lost more points from a winning position in the Premier League than the Hammers.

“I’m not fearful. I feel pressure, of course, because we are not producing, we’re not delivering and we don’t have enough points to feel happy and to feel safe.

Bilic is trying to see the positive side, but he has to, that’s his job, well at least in the public eye. “But I see the improvement,” he continued. “Against Spurs I saw a team hungry and alive, the points were there for us in a difficult away game, so that’s what I’m confident about.

However, in private, he should be fuming, this team is nowhere near the level they were last season. Away from home last term, West Ham were phenomenal. They managed to beat Arsenal, Liverpool and Manchester City in consecutive away games. An amazing feat for Bilic’s team.

Statistically, it was a nightmare in all three games. They averaged less than 42% of the ball in all three games, down at 35% for the City game. In total, they had 26 shots on goal, City had 27 in just that one fixture, but the away side picked up the maximum nine points. Winning 2-0, 3-0 and 2-1. Going forward they were clinical, but it was the defence that gave them the opportunity to add the clinical blow.

At the Emirates, James Tomkins, Angelo Ogbonna and Winston Reid combined for 19 clearances during the game. Unbelievably, against City, the New Zealand international made an astonishing 21 clearances all on his own. Tomkins and Aaron Cresswell made 14 between them. To put that in context Burnley’s Ben Mee is averaging 9.6 a game this season and Reid finished on 6.5 a game last term.

As well as the defence, playing mostly in a back four, it was the protection from the midfield that made a huge difference. Against Arsenal, the Italian defender, Cheikhou Kouyaté and Reece Oxford made 13 tackles, limiting the Gunners from getting a clear sight on goal.

In the superb win over Liverpool, although the home side had 13 shots on goal, just one was on target. Pedro Obiang and Kouyaté combined for nine tackles and five blocks. The Reds managing just four shots from inside the box.

When looking at the pure numbers, this season hasn’t been much different. In the 3-1 loss against City at the Etihad, they only had 33% of the ball, and just two shots on target. Pep Guardiola’s team had 22 shots and five on target.

The biggest change from that game was the formation and the attitude of the players that did so well last season. 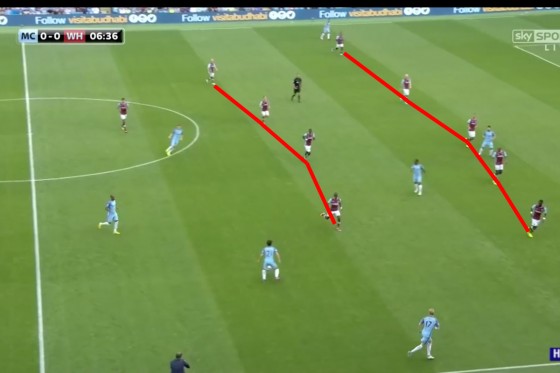 Bilic changed to 3-4-1-2, or as it more simply known, five at the back – which you can clearly see from the graphic above.

Raheem Sterling would score the opening goal of the game and you can almost see it coming when David Silva plays the ball out wide left. Kouyaté (in yellow) is ball watching in the middle, no idea the former Liverpool man is behind him. Michail Antonio, not a natural defender has his body shape all wrong and is instantly beaten. 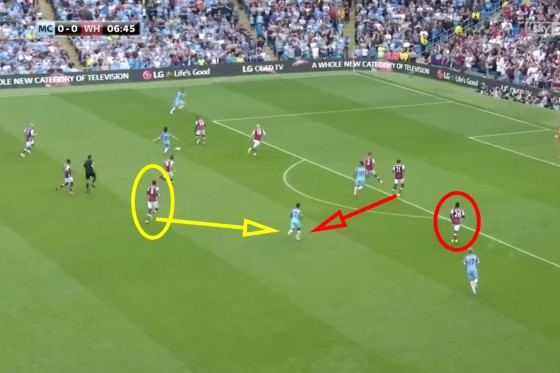 At this point, West Ham have three centre-backs picking up Sergio Aguero. The Argentine striker is one of the best in the world, but too many cooks spoil the broth and they all get in each other’s way. Arthur Masuaku (in red) is in the right position, but as he can see the play developing, he really should be telling Kouyaté to pick up the City No.7. 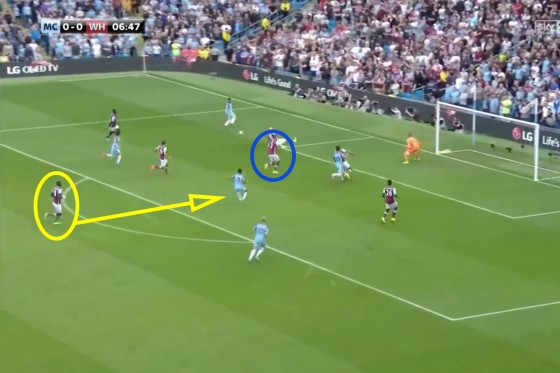 Eventually it’s Reid that’s caught in no man’s land and Sterling is left unmarked to apply the finish. Throughout the whole move, although the home side are on the attack, the Senegalese midfielder shows no interest in getting back to cover his defenders. That’s not the player we saw last season.

It was the effort from him, Mark Noble and the defence that gave Bilic’s side the protection to go and steal wins with very little of the ball.

Then, when playing at White Hart Lane, Kouyaté was asked to play on the right of the back three and unsurprisingly, it didn’t go too well. 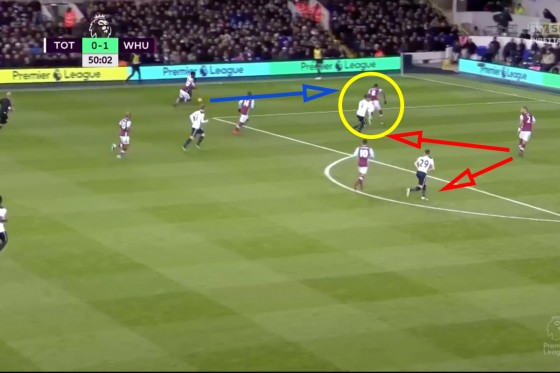 Danny Rose broke up the left, beating Antonio – again, far too easily – the make-shift defender (in yellow) sees the danger, but with his instinct to rush out and dive in. This makes it too easy for Rose and the left-back slips the ball inside to Vincent Janssen. Manuel Lanzini (red), a very attacking minded midfielder, playing in the centre, doesn’t have the awareness to track the run from Harry Winks. 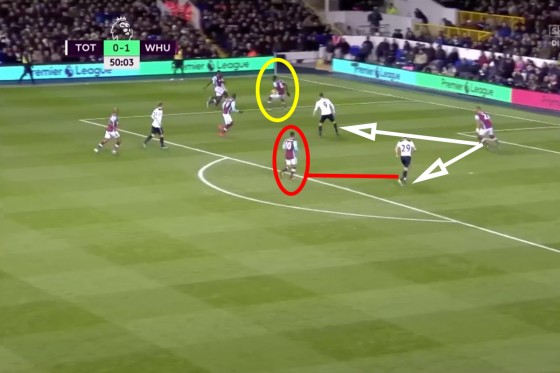 Winston Reid has a decision to make. He can either push out and close down Janssen, or try and cover both attackers. The Dutchman fires the shot, and although it’s saved, it falls to the unmarked Winks and he scores on his first Premier League start.

That sparked Spurs comeback and even for the third and crucial goal, it’s Kouyaté that is caught out of position again, leading to Son being brought down and Harry Kane winning the game.

That was a London derby that West Ham could and probably should have picked up at least a point, if not a win. However, it’s not because of a lack of luck, it’s a change in shape, players playing out of position and other players failing to reach the same levels as last season.

Winston Reid is averaging more clearances per game this season, up at 8.1 per game. He is also third in the division at interceptions made. He’s had to be that good for the Hammers just for them to be in the position they are.

Playing Antonio at right-wing back is a bad option and does nothing for the team or his attacking influence. Kouyaté doesn’t look up to the task this season and is even worse when asked to cover back. 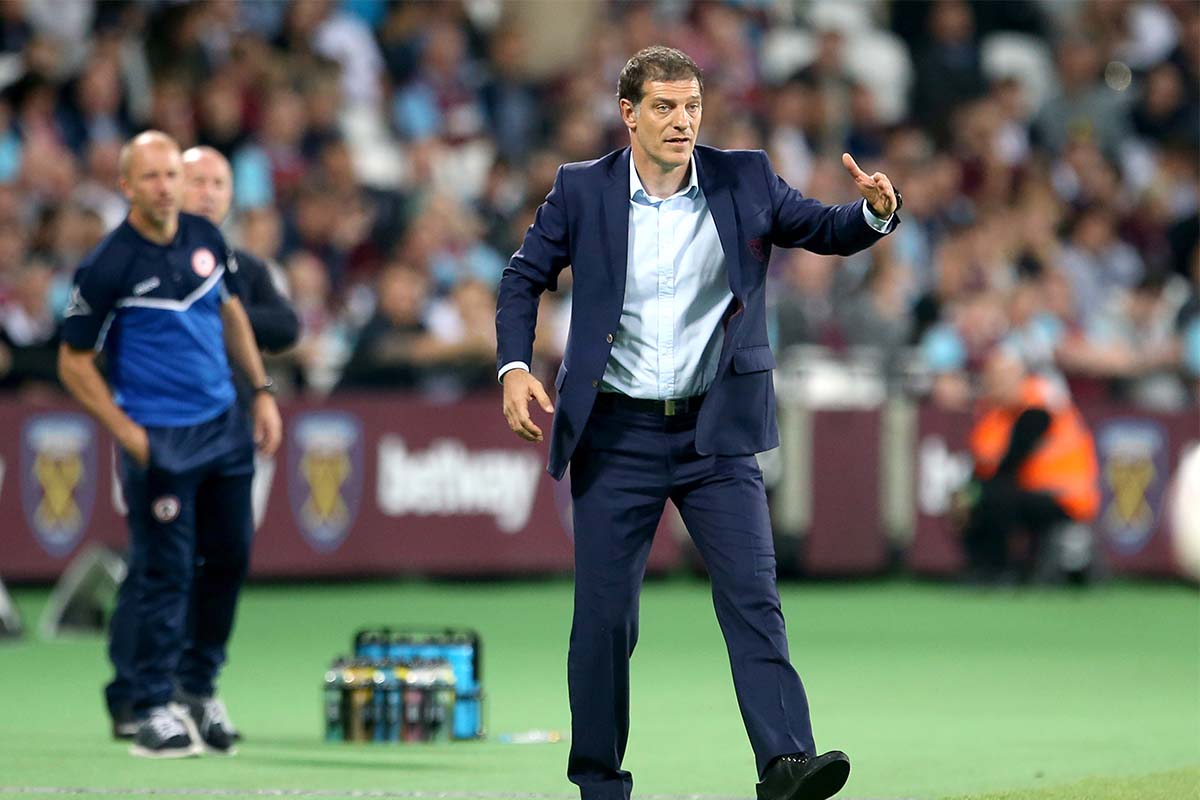 The next three games are crucial for Bilic. He won’t be expected to provide the same level of results as that perfect run last season, but if they can fix the mistakes and pick up something of a surprise victory in any of the three games, that could provide a huge spark for the rest of the season.