Liverpool are set to make a sensational move for Crystal Palace’s Wilfried Zaha in January, Football Whispers can reveal.

Sources close to the club revealed to Football Whispers that the Reds are prepared to sanction yet another big money raid on a Premier League club following on from the success of their summer acquisitions.

The former Manchester United player has impressed the Liverpool scouts in attendance over recent weeks and the Reds are now primed to jump ahead of Tottenham Hotspur in the queue for the 24-year-old.

Zaha was the subject of an approach from Spurs in the summer, with reports suggesting Mauricio Pochettino spoke to the player on the phone, but Palace rejected the £20million bid.

Pardew and the Palace board were reluctant to sell Zaha after sanctioning a £30million deal for Liverpool’s Christian Benteke as selling both Zaha and Yannick Bolasie, who was in negotiations with Everton, would have been too much of a hit for the Eagles – it would have been like buying a gun but selling the ammunition.

The Premier League table doesn’t tell the whole picture. Palace may be in 17th position and just a point clear of the relegation zone but for the most part their performances have deserved much better.

Zaha has been been a standout performer, terrorising many defences and has three goals and six assists to his name. He’s completing 4.4 dribbles per 90 minutes – 1.8 more than Sadio Mane – with only Neymar and Adama Traore being able to boast a better record. He’s has been an attacking menace and has played an instrumental role in the team scoring 28 goals in just the 17 matches, just one goal fewer than fifth-placed Spurs.

It’s easy to understand why Liverpool may be so eager to make their move now. It’s only December yet this is Zaha’s most productive season in terms of goals and assists to date.

He has upped his work off of the ball too. His Premier League average for Palace is 1.3 tackles won and 0.8 interceptions made per 90 minutes but this season he’s averaging 2.3 tackles and 1.1 interceptions. He’s really come of age. 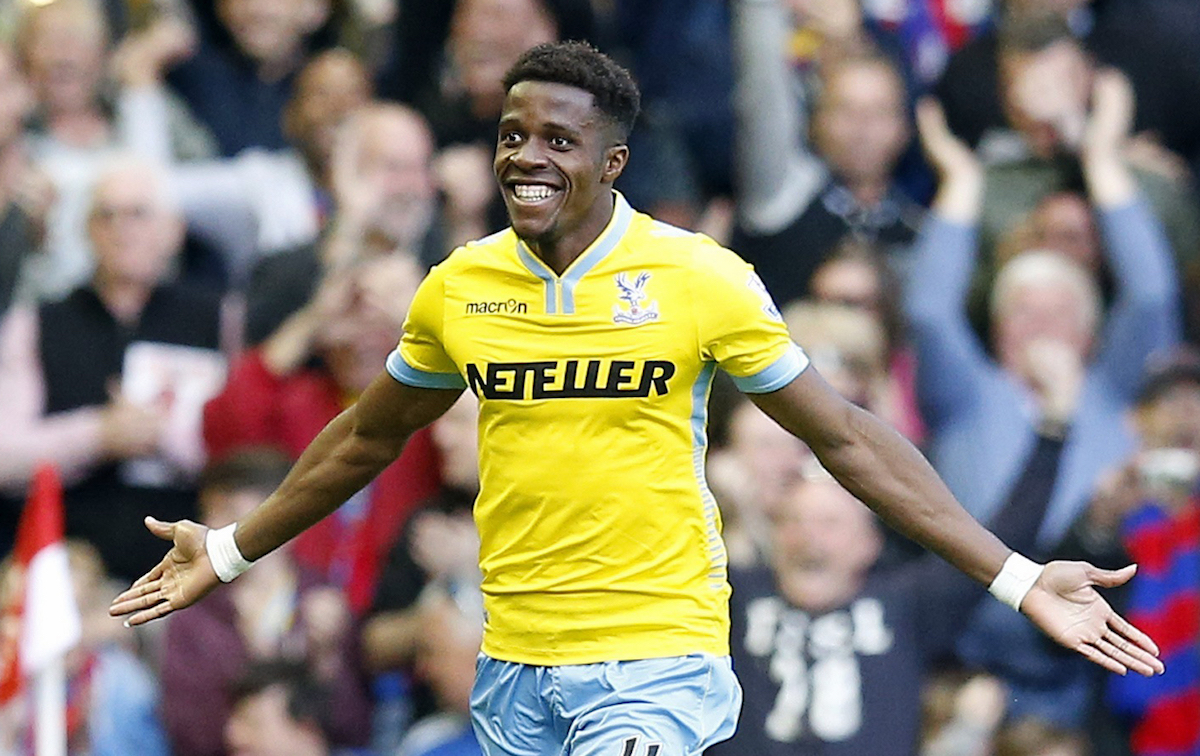 Liverpool are by no means short of goals. Klopp’s men have scored the most goals in the Premier League but with top goalscorer Sadio Mane going away to the African Cup of Nations in January, Danny Ings out for the season with a knee injury and question marks over the fitness of Daniel Sturridge – who has just returned to action following on from an injury – and Philippe Coutinho on his way back from an ankle injury, the German may want to bulk up his attacking options with the club still very much in the Premier League title race.

There is a chance Zaha will be on his way to the AFCON after publicly announcing in November 2016 that he would be switching his allegiances from England to the Ivory Coast. However, in December 2016 England manager Gareth Southgate revealed the FA would be doing their best to keep Zaha following on from his impressive early season form.

Zaha shares a lot of similarities with Sadio Mane. He’s got an aggressive attacking style which sees him look to be positive at every given opportunity. If there’s space to attack he takes it. He’s  a goal threat from wide areas and if he sharpens up his finishing he could easily net double figures. He has the ability to beat a man on the outside but is comfortable drifting in if there is space to exploit.

He doesn’t shirk his defensive responsibilities either and protects the right hand side in Pardew’s disciplined line of four when Palace are without the ball. 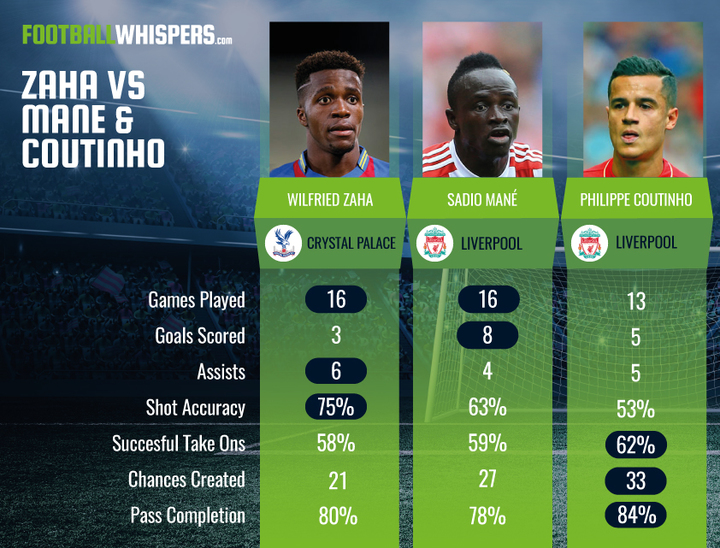 Liverpool use Mane and Philippe Coutinho as ‘wide’ attackers but both find themselves central with Klopp opting to use a narrow three in attack. This wouldn’t be alien to Zaha because, despite being a more traditional winger, he often finds himself central to support Christian Benteke when the striker drops deep to flick headers on (as seen in the picture below). He’s versatile and is able to play anywhere across the attack meaning he’d suit the fluid Liverpool system. 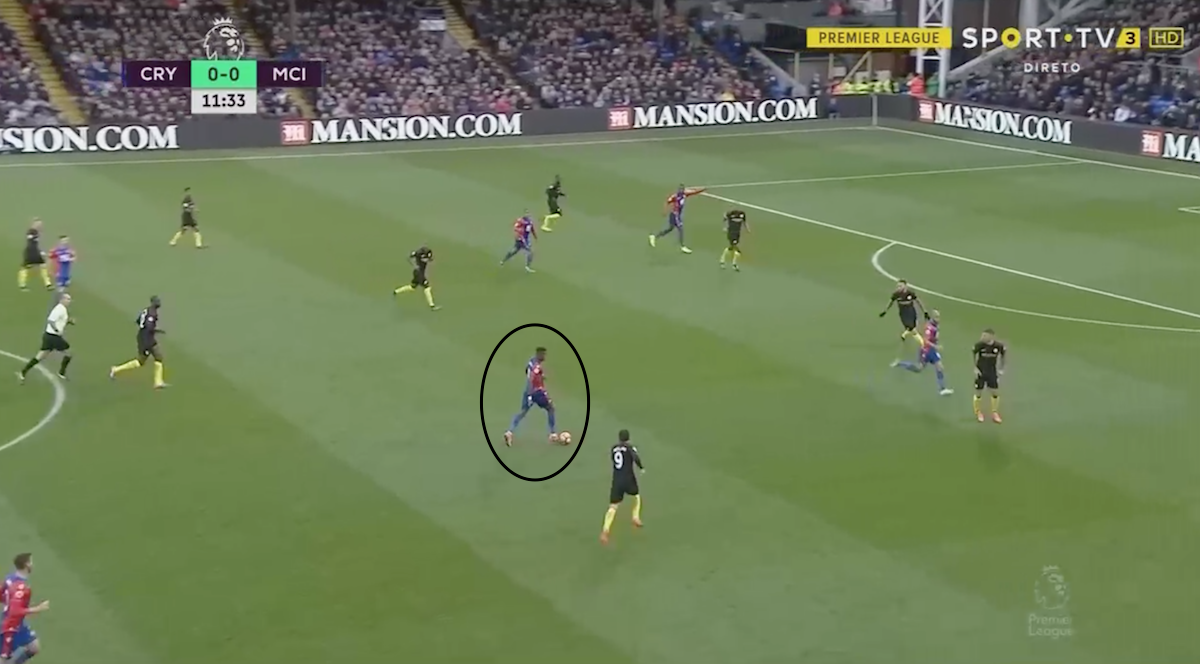 There are, of course, many players out there with similar traits who wouldn’t cost as much as Zaha. However, Liverpool are still owed £5million from the Benteke deal with Palace not paying the £30million upfront. Liverpool would look to use that to their in advantage in getting Zaha for a knockdown price if they forgo the potential clauses in the Belgian’s deal.

Liverpool would have no trouble doubling Zaha’s reported £35,000-per-week deal but a stumbling block may be his agent. The last time Liverpool tried to deal with Kick and Run Sports Management was when they attempted to sign Willian. The Brazilian seemed to play Spurs and Liverpool off against one another before Chelsea gazumped them both. 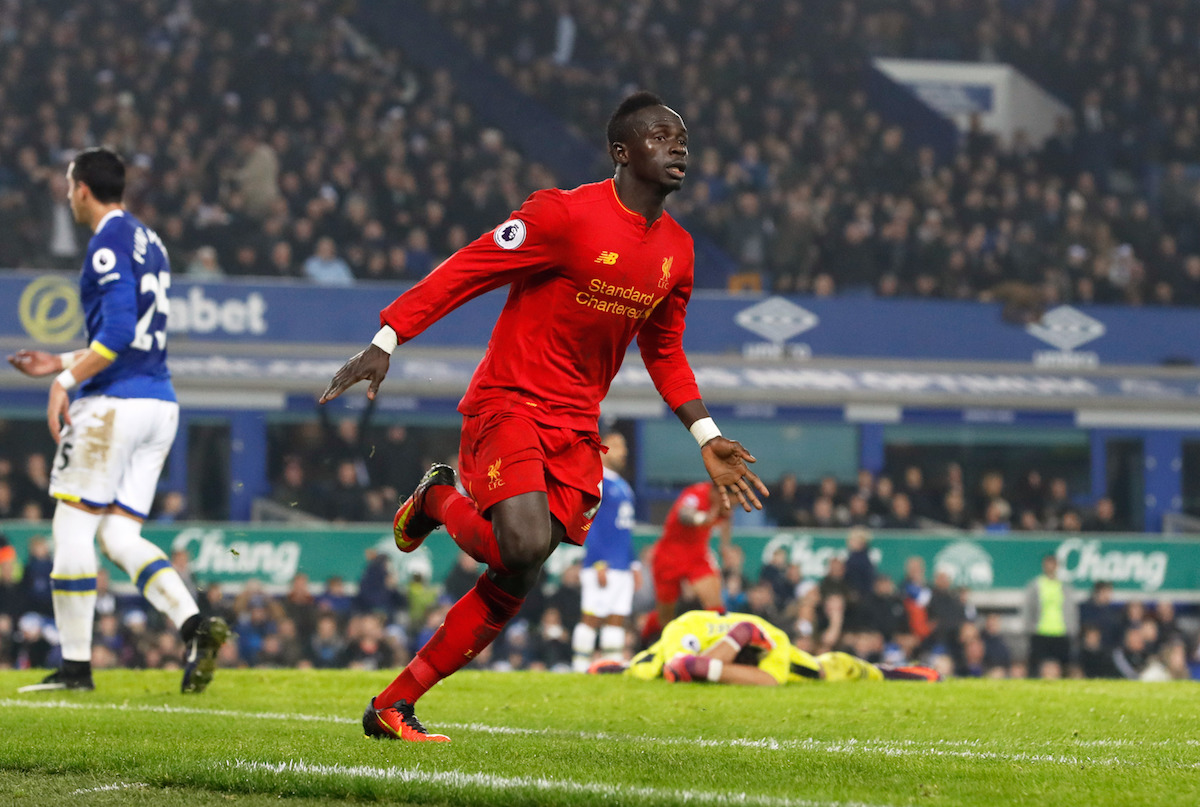 A deal Zaha 18 months ago would have filled Liverpool fans with dread. Since the inception of the Premier League Liverpool haven’t had the best track record when spending large amount of money on Premier League proven players. Stan Collymore arrived in 1995 for a then British record £8.5million, Andy Carroll swapped black and white for red when Kenny Dalglish signed him in January 2011 for a club record £35million, while Adam Lallana and Dejan Lovren joined from Southampton for a combined £43million.

The former has come on leaps and bounds under Klopp but the latter is still a divisive character. But after the impact summer signings Gini Wijnaldum and Sadio Mane have had Liverpool fans now seem a little more open to shopping within the Premier League.

Zaha is said to want European football and although Spurs can offer that right now in the form of the Europa League, the Liverpool project, with Champions League on the horizon if their form continues, could well be seen as a more appealing one?

Leicester City and Watford are bound by more than their remarkable 2013 Championship playoff semi-final. Both clubs have a knack for unearthing gems and Gonzalo...

Watford tend to do things their own way. It should come as little surprise they’ve made Le Havre midfielder Pape Gueye their first summer signing...